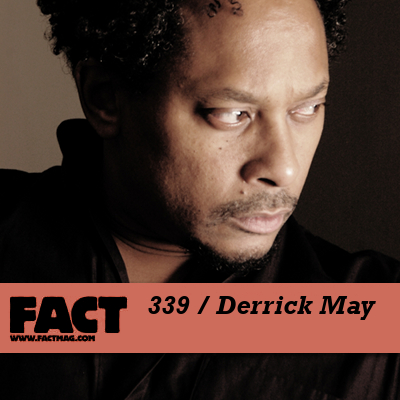 We don’t often feature old mixes as part of the FACT series, but when confronted with a classic session by Derrick May, one never previously made available online, we’re prepared to make an exception.

Recorded around ’93-’94 for Deep Space Radio, the mix in question only recently resurfaced when ‘Mad’ Mike Banks came across it in the DAT archives at Metroplex HQ. Clocking in at just 25 minutes, it’s a breakneck showcase of the energy, attitude and artistry that May brought to his DJ sets then as now – in his hands, tunes that you thought you knew become alien, unfamiliar, more resonant, possessed.

Put simply, Derrick May is one of the supreme architects of Detroit techno, along with his Belleville, Michigan schoolmates, Juan Atkins and Kevin Saunderson. May quickly saw the potential in synthesising the jacking momentum of house with the widescreen, lofty sci-fi vision of techno, and developed a soaring signature sound able to move bodies and blow minds with equal force. From 1987’s ‘Nude Photo’ onwards, May produced a run of classic tracks – under his own name and as Rhythim Is Rhythim, Mayday and Long Ago, not to mention as part of collaborative projects such as R-Tyme – that have become part of the fabric and lore of electronic music. Founded in 1986, his Transmat label provided a platform disciples and fellow visionaries such as Suburban Knight, K. Alexi Shelby, Octave One and Joey Beltram (1990’s world-conquering ‘Energy Flash’).

May as quietened down on the production front in recent years, perhaps aware that even he can’t top his profound studio achievements of the late 80s and early 90s, but he remains active and utterly compelling in the field of DJing – 25 years after his career began, still no one can rip apart a club like this man. In fact, May just gets better and better, and frankly only an idiot would miss the opportunity to see him flex his muscles this Friday, 27 July, when he headlines the third and final instalment of Dollop’s Detroit Series in London.

Taking place at Netil House in Hackney, it’s a rare opportunity to catch May in the kind of intimate warehouse space in which his music thrives. Support comes from Optimo’s JD Twitch, Waifs & Strays, Nic Tasker, Jon Rust and Dollop DJs and, at the time of writing, advance tickets are still available here for just £12.50. Do not miss.

Without further ado… enjoy this classic mix from the master. Your your Monday, your week, your life just got 10 times better.

Special thanks to Don Chow