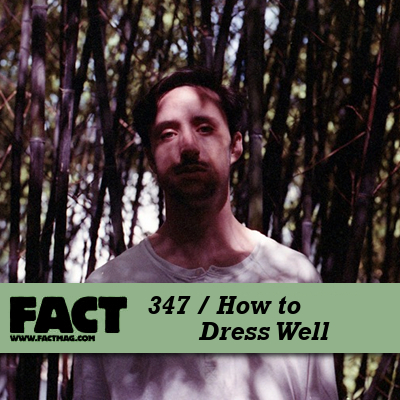 This week sees the release of what has been, round these parts at least, one of the most anticipated albums of 2012: Total Loss by How To Dress Well.

It arrives some two years after Love Remains, the album which announced Tom Krell’s extraordinary to the talent world, and which blew up when reissued by Tri Angle in early 2011. Initially plagued by a thoroughly unjust association with the then nascent witch-house fad, it quickly became obvious – to anyone with a pair of ears, and a brain between them – that Krell’s vision of sepulchral, achingly romantic R&B was very much its own thing.

Total Loss is, if anything, a more desolate record than its predecessor – no mean feat. But amidst the gloom, amidst the despair, lurks the promise of rebirth and redemption. Downer music has rarely sounded this alive or this exhilarating, and not for nothing has the record already earned a number of glowing notices. As FACT’s Jon Colley learned when he interviewed Krell earlier this month, this is a record more concerned with the dynamism of mourning than the inertia of depression.

If you’ve ever checked out the How To Dress Well blog, you’ll know that Krell is as keen a music fan as he is music-maker, with wide-ranging but discerning tastes – from airbrushed commercial rap to depressive black metal. He’s a man who knows his onions, basically, and as such it was a no-brainer to ask him to record a FACT mix. We’re pleased to say that he’s turned out a blinder, focussing on strung-out, diffracted hip-hop beats, phantasmagoric R&B, lovelorn pop and gaseous avant-electronics. You will enjoy. Tracklist to follow.

Tracklist:
1. HTDW w DMX/Britney Spears & Matt Lauer – What’s the Reason? 1 Don’t Know…
2. Shai – If I Ever Fall In Love
3. Porn Sword Tobacco – Evans Sundown Corp.
4. Mariah Carey – H.A.T.E.U.
5. Alicia Keys – No One
6. Beyonce – Halo (Youtube Rip w HTDW dum drumbs)
7. Maxwell – Whenever Wherever Whatever (w Simon’s apartment bird noises)
8. Babyface – When Can I See You Again
9. Jimmy Eat World – Table for Glasses (Julien Donkey Boy Edit)
10. Estasy – I Saw A Chapel of Gold
11. Blood Diamonds – Ritual
12. Prince – Purple Rain (HTDW ‘World I Need You’ Edit)
13. Alicia Keys – It Doesn’t Mean Anything
14. Grimes – Know The Way
15. Chief Keef – Kaykay (Please Save Chicago Edit – WHY IS EVERYONE DYING AND NO1 SAYING ANYTHING)
16. Steve Reich – Clapping Song b/w William Basinski – Garden of Brokenness
17. HTDW – So Long as We Are Together I Can Hold My Contempt For Existence At Bay
18. WHY ARE WE HERE? HERE? WHY? Silence