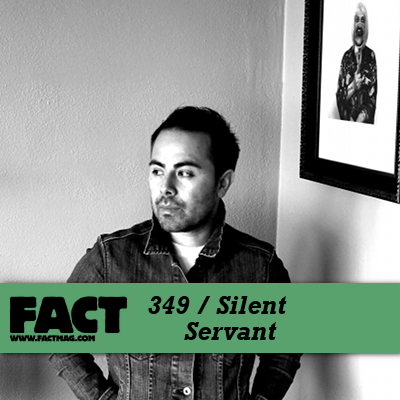 Recorded to mark the recent release of his debut album, Negative Fascination, on Hospital Productions, the mix focusses on propulsive darkwave and  dubbed-out post-punk, placing tracks by contemporary acts including Led Er Est, Haul and The KVB alongside cult classics and cassette obscurities from the likes of Modern Art, No More and Snowy Red. Like Negative Fascination, it’s pure of purpose and entirely successful in its aims.

Silent Servant is the solo project of Juan Mendez, the California native who first made his name in techno circles in the 90s with his production work under the name Jasper, and with his co-founding of the highly respected Cytrax label. It was during this time that Mendez befriended Karl O’Connor, aka Regis, beginning a creative alliance that has lasted to this day and led to all kinds of interesting outcomes.

The two artists, along with Dave ‘Function’ Sumner and Peter ‘Female’ Sutton, turned Sandwell District from a functional 12″ series into highly influential artistic collective and record label, encouraged in no small part by Mendez’s design and visual nous, and culminating in the release of a widely praised album, Feed-Forward (2010), before they decided to call it a day earlier this year. Mendez also became intimately involved with the running of O’Connor’s long-running Downwards label, bringing young American bands like Pink Playground, Dva Damas and Deathday into the fold (check the recently released So Click Heels compilation for a fine snapshot). One such act was Tropic of Cancer, the brainchild of Mendez’s wife, Camella Lobo, to whose first three releases (‘The Dull Age’ and ‘Be Brave’ on Downwards, The Sorrow Of Two Blooms EP on Blackest Ever Black) he contributed significantly.

Of course, it’s as a techno producer and DJ that Mendez remains best known. His 12″ productions as Silent Servant elegantly combine the industrial force of classic Downwards with the the dub-wise spaciousness of Basic Channel/Chain Reaction and the skippy minimalism of Cytrax. For Negative Fascination, he has widened his palette, or rather wholeheartedly pursued directions that in the past his work has only hinted at. In simple terms, the LP finds Mendez reconciling his interest in cutting edge dance music and pin-sharp, club-ready sound design with an even deeper, more instinctive affection for 80s DIY, minimal wave and the like, and this reconciliation yields some extraordinary results: take ‘Moral Divide (Endless)’, where a typical 4/4 kick is rejected in favour of a scuffed, skeletal drum machine tattoo that Suicide might reject on grounds of it being too raw, then shrouded in strings that could teach Detroit a thing or two about grandeur and moodiness, or the way ‘The Strange Attractor”s EBM-style tom-hits ricochet wildly against the taut techno grid that encloses them, or ‘Temptation & Desire”s foregrounding of shoegazey guitar noise. It’s undoubtedly one of the year’s finest full-lengths.

The Silent Servant FACT mix sheds further light on, and traces the origins of, this “weird mutation”. It was recorded live, with turntables, CDJs and mixer with effects. Stream or download it via the Soundcloud player below.