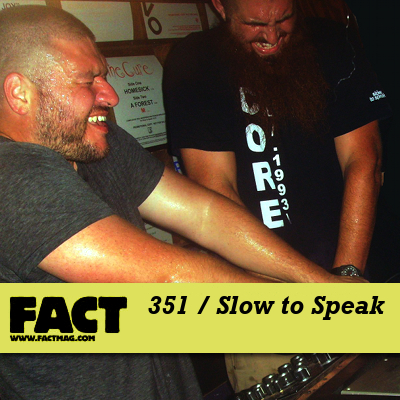 FACT mix 351 is by New York’s foremost guardians of house music and culture, and its most vocal, vital malcontents: Slow To Speak.

Slow To Speak is the duo of Francis Englehardt and Paul Nickerson. They are the proprietors of Dope Jams, the most iconoclastic dance music store on the planet, located on Myrtle Avenue in Brooklyn. A visit to Dope Jams won’t just see you walk away with an armful of incredible purchases (if you arrive with half a brain), it will also leave you in no doubt of the disdain in which Nickerson and Englehardt hold so many “rated” DJs and producers – just ask Francois K, Vakula or Nicolas Jaar. They do not suffer fools gladly and they have no reservations when it comes to making mincemeat of sacred cows. In the back-slapping, masturbatory wold of contemporary house and techno, Dope Jams’ rebellious attitude is as valuable as it is rare. More importantly, they’re negativity towards what they hate is dwarfed by their enthusiasm for that which they love and hold dear.

Dope Jams is more than a record store; it’s the nerve centre of numerous labels and related operations. The best known is probably the Slow To Speak bootleg series (aka Celebrate Life): high quality 12″ pressings, in glorious screen-printed sleeves, of classic tracks by everyone from Talking Heads and Kraftwerk, to Van Morrison and The Cure, via Alice Coltrane and Steve Reich; occasionally Slow To Speak’s own edits feature. Far from being an incognito operation, Nickerson and Englehardt print their own names on the sleeves, along with all the appropriate recording and copyright credits from the original releases; in legal terms, these guys hide in plain sight. In parallel they run CORE, an apparently wholly legit series of house reissues, and other more short-lived or erratic imprints include Preserved Instincts (Chasing Voices), Gay Records and Alice B. Toklas.

Having grown up in Ipswich, Massachusetts, they were turned onto house at Armand Van Helden’s Loft parties in Boston, and eventually started their own legendary night in Boston, LIFE, which lasted three years. Since moving to New York the shop and various label operations have been their main focus, though you’ll still find them DJing like their lives depend on it at irregular parties in the store. Check out this video of the launch for their new CD (of which more in a moment):

“It starts off with two turntables and a mixer,” Englehardt recently told Resident Advisor when asked about their approach to DJing, “and then it goes crazy… It’s done a million different ways. Yes, sometimes it’s one pass, and then we chop the dead pieces out, that’s it. Other times, it’s like record-by-record, like, fighting your way through the goddamn mix, you know what I’m saying? It’s a little bit of everything, honestly. We use everything at our disposal to try to make the best mix that we can every time.

“When you think about the way old hip-hop mixtapes were done, you just got smacked over the head record after record, like bang bang bang bang. And we try to do the same thing with house music, because, to me, that’s honestly the way it should be played live.”

This spirit and approach is strongly apparent in their latest release, Classic House Grooves: Dope Jams New York City, a mix CD that finds them raiding the catalogue of New York’s King Street Sounds label. They put the mix together because they were dissatisfied with the way that King Street’s classic era had been all but written out of house lore, and how all previous attempts to capture its magic had failed miserably; they sent their effort to the label and they agreed to put it out, making it the first officially licensed Slow To Speak DJ mix to date.

The disc is out now, and to celebrate its release, Englehardt and Nickerson have put together a special mix for the FACT series. Almost needless to say, no tracklist has been provided, but we can tell you that the likes of Legowelt, Current 93, Burial, Plastikman, Beige and Atoms For Peace feature; even more needless to say is what an exhilarating listening experience it is. Dig in.