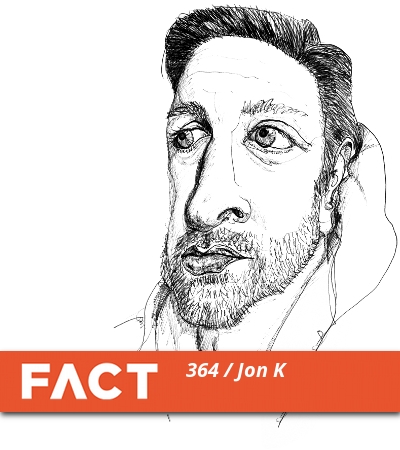 The first FACT mix of 2013 comes from a DJ we hope to hear a lot more people picking up on this year, Jon K.

In truth, it’s not like we even listened to that much Jon K until he submitted this mix. Instead, the Manchester resident is one of those DJs that we’d always heard about – through his involvement in record store Fat City, his residency at the Hoya:Hoya club night alongside Illum Sphere, Krystal Klear, Lone and Eclair Fifi, and the fact that when he took part in Red Bull Music Academy’s recent Disco Clash, fellow participants Skream, Jackmaster and Krystal Klear were adamant that he was the stand-out DJ of the night. He’s your favourite DJ’s favourite DJ, we guess – one of those guys.

Anyway, Jon got in touch with a mix that he wanted to place, and we were keen after one listen. Given Jon’s past involvement in a night titled Eyes Down, it’ll come as no surprise that there’s some weird shit in here – endlessly echoed space-disco, crackled doom, one track around the 47 minute mark that must be what dying in a flooded submarine sounds like – but there’s also plenty to move your hips, be it disco, hip-hop, or Chi-town drum machine jams.

When Mr. Beatnick wrote his primer to The Essential… Theo Parrish for FACT in 2010, he claimed that it’s “genuinely hard to remember a time when the art of DJing was as simple as … collect records, build a collection, exhibit that collection in front of an audience.” This is what Jon K’s FACT mix does, and it flows in such a way that we haven’t stopped listening yet.

If you like what you hear, Jon will be DJing in Fabric’s Room 2 this Friday, for the launch party for Ben UFO’s Fabriclive67. Pearson Sound, Pangaea, Optimo, Altered Natives, MMM, Kuedo and more are also in attendance – more details here.