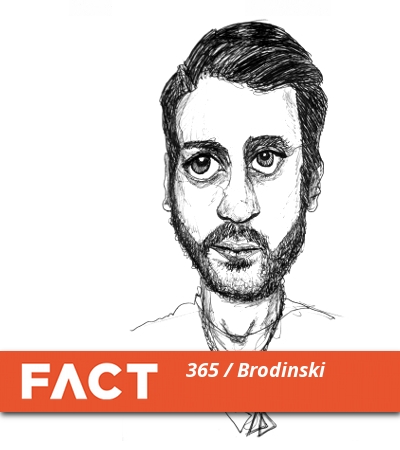 Given his constant enthusiasm, reflected by both his collaborations with younger acts and labels and, inevitably, his Twitter feed (the work of someone who pretty much never has a bad day), it’s odd to think of Louis Rogé as an old hand. But although he’s not quite a veteran, he’s certainly been round the block: since his 2007 debut single, the ubiquitous ‘Bad Runner’, he’s released on Turbo, Southern Fried, Grizzly and more, most recently settling down on his own label Bromance.

Despite this, it’s probably Brodinski’s mixes that we enjoy most. 2010’s Best of Everything was a double-CD-style affair that covered electro on one side and hip-hop on the other (the latter side was then expanded with a free folder of hip-hop and r’n’b refixes by artists like French Fries and Bok Bok), while 2011 saw him contribute to Fabric’s long-running mix CD series. He’s also selected for Bugged Out’s Suck My Deck! mix CD series, and dropped a neat chopped and screwed tape in 2012. We’re not the only ones taking notice, either: Brodinski will be joining BBC Radio 1’s In New DJs We Trust roster in the coming months.

FACT mix 365 continues to hone the blend of hip-hop and contemporary club music that’s been at the heart of Brodinski’s sets over the last few years, and comes on the eve of his performance at Bugged Out Weekender this weekend, January 18-20. Ben UFO, Benga, Joy Orbison and more will be joining him; for more information, click here.

No tracklist, but you should all know the closer.