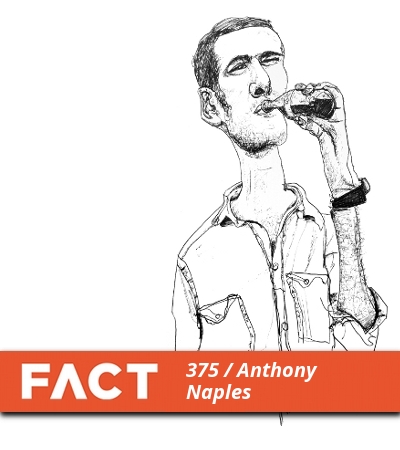 Anthony Naples is making all the right moves.

Debuting last year with the exceptional ‘Mad Disrespect’ single on Mister Saturday Night – the first track Naples ever wrote, not to mention released, so the story goes – Naples grew up in Miami but already seems synonymous with his current hometown of New York. He’s not released much: since ‘Mad Disrespect’ there’s been a follow-up single on MSN, an EP titled El Portal on London label Trilogy Tapes, a Rubadub-distributed white label single and a remix for Four Tet’s ‘128 Harps’ – the genesis of which, according to Naples’ recent interview in Resident Advisor, came when Four Tet witnessed what ‘Mad Disrespect’ did to the room when DJing for MSN’s regular New York party – but the careful quality of his discography to date has made him one of house music’s most in-demand prospects.

With Naples touching down in London for secretsundaze’s Easter Weekend party this Thursday, where he’ll be joined by Nina Kraviz, A Guy Called Gerald and more, the time seemed right for a FACT mix. Every bit as well put together as his releases to date, Naples’ FACT mix doesn’t come with a tracklist – so comments section, time to get train-spotting – but it’s a wicked selection of house and techno both familiar and fresh, with hands down the best opening seconds of a mix we’ve posted this year. You’ll see what we mean.