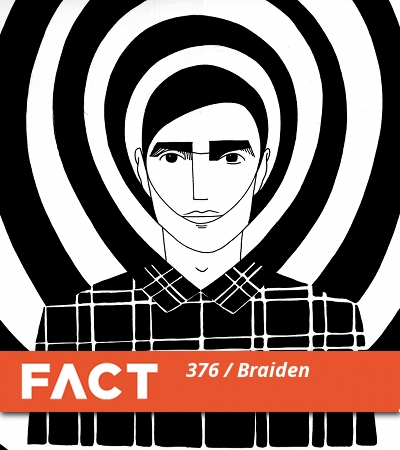 Back then, the London-based DJ had recently shifted from online radio station Sub FM to Rinse, and was being talked at as part of a new wave of  not-quite-dubstep DJs from London, alongside Oneman, Ben UFO and Brackles. Four years on from that three-deck mix, Braiden holds down a show on a different London station, NTS, and has a small but close-to-flawless discography under his belt. His first single, ‘The Alps’, was housed on Joy Orbison’s Doldrums label, and a second single, ‘Belfry Tower’, arrived last year on Amsterdam label Rush Hour, following a pair of remixes for SBTRKT and Jacques Greene.

Braiden’s second FACT mix has a more European feel to his first, but although the mixing’s smooth as a baby’s, it bumps the way that house and techno should, with the odd drum machine work-out that betrays Braiden’s early love of classic electro. It’s the sort of mix that would sound shit-hot on a boat off the coast of Croatia – which is funny, because Braiden will be playing FACT’s boat party at August’s Stop Making Sense festival, along with T. Williams and Tom Lea. For more details on that, head here.

Following a four-month run by Graeme Ross, FACT mix 376 also marks the start of Alex Solman’s run in charge of the mix illustrations. Renowned for his work with Hamburg club Golden Pudel, as well as sleeve design for the likes of Demdike Stare, we’re psyched to have Alex on board, and we’d like to send special thanks to Graeme for his work over the last four months.