“The Internet is the parallel dimension we’ve been searching for.” Panteros666 premieres ‘Hyper Reality’ video and opens up about new LP 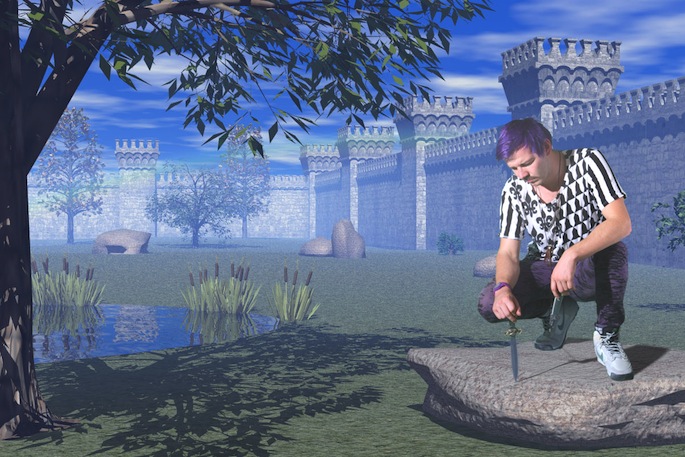 The Parisian producer is part of France’s club music vanguard.

Victor ‘Panteros666‘ Watel is one quarter of the Club Cheval collective, a four-headed cerberus that share a freewheeling approach to dance music, disregarding propriety at every opportunity. Last month, he released his most significant effort to date on Bromance Records: the seven-track Hyper Reality mini-LP, due to get the double-vinyl treatment on Record Store Day through The Vinyl Factory.

Along with premiering the video below, we spoke with Watel via email about his production approach, the digital art that permeates his work, and what “hyper reality” means to him.

How did you go from drumming in The Teenagers to producing with the rest of Club Cheval? It’s a huge departure in style.

Club Cheval was already in our minds at that time; Sam Tiba and I were just getting our hands on electronic production, Canblaster was willingly secluded in a homemade bunker working on the Jetpack EP, and Myd was busy finishing ‘Train to Bamako’; it sounds like history but it was just two years ago. Drumming for The Teenagers was a coincidence: they had a tour planned in China and Taïwan but had no drummer. I bumped into Dorian (the guitarist) at some party, talked for a bit and he asked me if I could learn 14 tracks in 10 days and play with a click, I said “no problemo,” and there I go.

“I have a Gandhi approach to club music where all sub-genres matter and deserve respect.”

Your influences are all over the map, from Belgian techno to US club. What’s your production process?

I happen to have uncontrollable musical crushes on very specific areas of club music. Mostly due to the fact that almost everyday, I massively download vintage dance and techno compilations from everywhere. All this clubbing data is organized in hard drives like my very own personal electronic music encyclopedia, where Marcel Dettmann is between Dance Italia ’91 Club Party Hits and a file of unreleased tracks by David Carretta. I love it. I have a Gandhi approach to club music where all sub-genres matter and deserve respect: Derrick May Anthology = Happy Hardcore Nation Vol. 3. I have a good feeling when all these influences fit seamlessly into an original track.

“Hyper Reality” seems more like a theme than a title. What does it mean to you, and how did that affect the LP’s creation?

Titles in club music mean nothing. Giving a name to a club track is like giving a name to a dog. On the other hand, working with a self-imposed theme gave me a much clearer creative drive. It took me a year to design the 60 minute long digital fresco I use in my live show – the file is so big it could cover the whole Sistine Chapel – and another 4 months to develop the “Panteros Live Kinect Software”. The 7 tracks of Hyper Reality derive from this work, so there is a cool harmony between the images and the music.

A significant part of the Panteros666 project is the visual component, from album art to the live show. What is it about “Internet art” that appeals to you?

The Internet is the parallel dimension we’ve been searching for [for] so many decades. I don’t think it’s only “a cool tool to keep in touch with friends, read the news and find new music easily.” In my mind, the Internet is the only revolution of my generation, the rest is same old human stuff. The online world (pardon my 90s expressions) blossomed into an “organized chaos” almost like vegetation even though it’s 100% man made, pretty much like the live visuals of Hyper Reality.

Then comes “Digital Art”; I don’t know much about it, because I’m not doing a PhD in Philosophies of Art, but i think something can be coined as “digital art” when: It’s been created from nothing to something with software (so yes a Sine Wave made with a Rob Papen plug in could be digital art); It’s been collected via “save image as” from a website; It feels new. This third one is quite elusive, but it’s important to create one’s own images, not to replicate other people’s work without using at least 35% of imagination. That small thing that takes you from clueless copy to re-interpretation. My digital art buddies have always been Jerome LOL and @LILINTERNET.

What are the inspirations for your live show?

I can’t possibly name them all, inspirations are everything. The live show features a lot of fury and flames, rocks and plants, colors and data moshing effects. I love psychedelic animations and glitch art as much as i love 3D landscapes and nature, so i guess you find a lot of these in the live show. My digital clone, moving behind me via the XBox Kinect when I perform is there to represent the radness of new technologies.

Tell me about the ‘Hyper Reality’ video. How’d that come about?

The idea of the video was to simply reverse the live process: in my live shows I integrate my body in a parallel world; in the ‘Hyper Reality’ video, I integrate the parallel world in a human body. I did not use my body because it’s shit, I mean it does not look like a Greek statue enough. I needed a real bodybuilder. Woodkid had the great idea to introduce me to François Sagat. He’s a famous homosexual pornstar who now performs; I saw him in Bernard Whilem’s shows and Christophe Honoré’s movies. I asked him if he’d accept to play the role of a cyborg statue for me, and he loved the idea. We shot in La Gaité Lyrique, a modern art museum.