“Nerd icing”: The-Drum open up about the concept behind debut album Contact 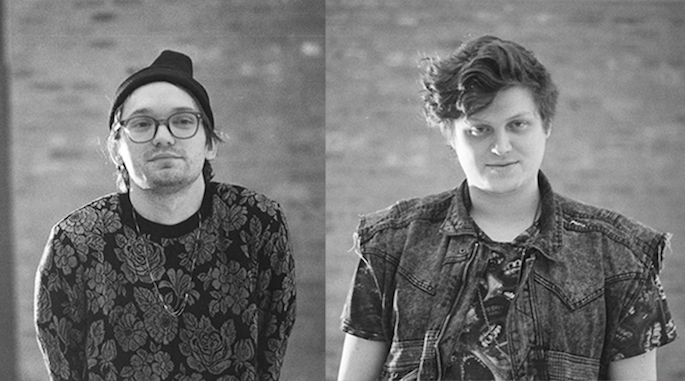 Chicago duo The-Drum (comprised of Jeremiah Chrome and Brandon Boom) broke through last year with a pair of EPs and a self-released effort with contemporaries Sich Mang, quickly establishing the template — if you can call it that — for their sound: shifty grooves, syrupy, synthetic ambience, and the seductive quality of R&B slow jams.

Apart from their futuristic take on R&B, dance, and ambient music, a major component of The-Drum’s music are references to transgressive sci-fi literature by the likes of J.G. Ballard and William Gibson. Heavy Liquid’s hypnotic, percolating ‘Euthanasia’ closes with a sample of the 1971 short film adaptation of Ballard’s seminal work Crash, while last summer’s Sense Net EP takes its title from William Gibson’s cyberpunk bible Neuromancer.

The latter EP begins a sci-fi, dystopian thread that continues on their forthcoming album, Contact. Both efforts tie into each other, so much so that the former will be packaged with the latter. “It gave us a concept world to work with,” Boom explains. While “some things are created without conception,” Chrome says that they talked for a long time about doing a concept album.

While Contact is the duo’s first full length album, The-Drum existed for some time before it was public. The pair had written and recorded about 50 songs before they sent one out, developing their sound and honing their craft before subjecting themselves to blog-cycle scrutiny.

Chrome moved to Chicago about eight years ago, bringing his band Clique Talk with him. His musical background bounded from metal and noise, to underground dance music, and eventually to rap and R&B. “I came to R&B pretty late,” Chrome admits. “Things like SWV were new to me, and I was definitely interested.”

For his part, Boom grew up in a household with a lot of new music, especially rap and R&B. He remembers buying 2Pac’s All Eyez On Me in 5th grade. “I would play Makavelli in the car and I knew all the words,” he remembers. “My grandma was very worried about me.” He would eventually play in a New Orleans noise act before moving on to R&B beats thanks to Ableton and a little bit of gear: “Being destitute-broke prevents you from having all the gear you want, but with the computer, everything’s free.”

The seeds of The-Drum began when an R&B singer reached out to Chrome for beats, who then enlisted Boom for the project. Unfortunately, while Chrome was looking to move away from the Italo disco of Clique Talk, that’s exactly what the singer had in mind, and the project was scrapped — but not before the pair decided to continue producing together.

Running down their influences for the project — avant-gardists like Art of Noise and David Van Tieghem, R&B and rap touchstones like Timbaland and The Neptunes, and contemporary Atlanta beatsmiths Lex Luger, Shawty Redd, and Zaytoven — results in a calculable but not contrived list. “The older i’ve gotten, the more I feel that when people compartmentalize music, it’s stupid and kind of harmful,” Boom says. “I always say, I like Three 6 Mafia the same way I like Throbbing Gristle.”

Contact was recorded over the last two years, with the duo crafting songs with the album in mind even as they recorded Heavy Liquid and Sense Net. Yet even if the songs are from different time periods, they share a similar sound palette. “Every idea we’ve wanted to put on there is there,” says Chrome, with bits and pieces of certain tracks appearing across the album, and sonic motifs and samples weaved throughout. The house where they live and work is practically a compound for creatives, as a “revolving cast” of friends and collaborators moved in and out of the process. 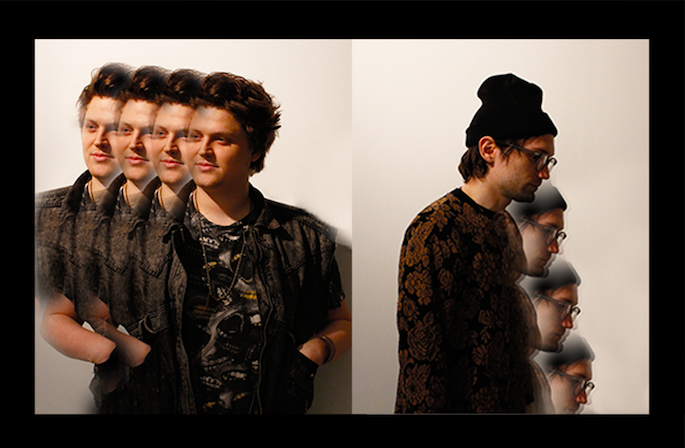 The result is an ambitious album that is much more personal and sonically captivating than the output of the cottage industry dedicated to cyberpunk soundtrack homage. Contact is definitely designed to be listened to as an album, even if certain songs work well together (e.g. ‘SimStern A’ and ‘SimStern B’), and it ranges from the frenetic, tribal ‘Sirens’, to the mellow, Eastern-tinged ‘Switch’, to the nearly eight minute epic ‘Mantra’.

And while Contact is clearly a concept record, they both stress that the thematic hook should be the “nerd icing” on the cake, rather than the focus of the listening experience. “We want it to be music serving the concept,” Chrome says, “Not the other way around.” The few audio clues that lead the way (e.g. the launch sequence that begins the album) give Contact more of a choose-your-own-adventure vibe than a firm narrative; the duo confess that their own stories for the album might not even be the same. Either that, or “the whole album is a lost soundtrack to Jodie Foster’s Contact,” as Boom jokes.

Aside from preparing their debut album, The-Drum have come full-circle, producing hazy, romantic R&B as part of JODY. The collective combines the pair with Dave Robertson, Khallee Standberry-Lois, and James “The GTW” King, and before debuting in February, the project had gestated for some time. The-Drum knew Robertson for about a year before finding out that he was a long-time rapper; similarly, they had known Standberry-Lois for two years and had often talked about doing a project together. Rounding out the group, they added Chicago-via-Nigeria polymath King, on the strength of his falsetto.

“We want it to be music serving the concept, not the other way around.”

The recording process seems fluid and fun. “Not every track has everybody on it,” says Chrome, who also contributes vocals to the project. “Everyone covers different areas sonically and style-wise.” The members of the group often hang out or stay over, and even as he admits that they often “get wasted instead of making music,” their output is impressive. Although it was released in March, JODY recorded the Magique EP last summer; a full length is already in the can and work has begun on both another album and a JODY rap mixtape.

“Our pattern is to sit on things,” Chrome explains. “It gives us the ability to tweak releases.” Chrome is particularly obsessive; he made 40 beats last year, and while only a few were released, he plans to share a beat tape in the future, culling the unused material from his hard drive. “Having a bunch of releases, we worry about oversaturating things,” Chrome says, “It’s already hard enough to sift through everything.”

Meanwhile, The-Drum wants to transition into doing production for other artists; atop the list are Chicago talents Jeremih, Sasha Go Hard, Tink, and Young Chop. They made some songs with London duo The Big Pink, but don’t know if they’ll see the light of day. “It was a learning experience,” says Boom, who admits they might have “Drummed-up” the songs a bit too much. He would love to produce for a rock band, naming CAN-descendants Cyclopean as a dream project.

For his part, Chrome produced a rap album/mixtape with Chicago newcomer KIT, which is due out soon. As for future music from The-Drum, there’s even an idea for a concept record of a different kind, one composed from a palette limited to 30 or 40 sounds. But whatever the duo does next, one thing is clear. “The-Drum has to sound a certain way,” Chrome says. “Worrying about getting money, that’s stupid — we just wanna work with people.”

Contact is due out on June 25 via Portland’s Audraglint Recordings as a double vinyl LP, bundled with a vinyl version of Sense Net.