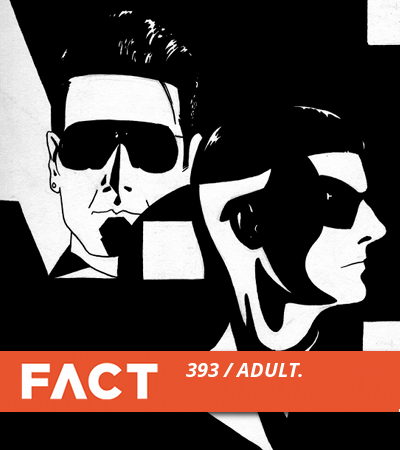 Lights off, shades on – ADULT. are in the building.

2013 is a good time to by making – and buying- electro-pop of a darker disposition: Streetwalker, The Soft Moon and Powell are among those turning 1980s darkwave to inventive new ends; a string of labels (of whom Minimal Wave and its Cititrax offshoot are the field leaders) are excavating ossified coldwave gems on a monthly basis; and the ugly gloss and cocaine showers of electroclash have just about disappeared from our collective memory. Prime time, then, for ADULT. to drift nonchalantly back onto the scene.

Since the late 1990s, husband-and-wife duo Adam Lee Miller and Nicola Kuperus have been pushing an instantly recognisable brand of neurasthenic electro. Schooled on John Foxx and second wave Detroit Techno, their output is all sleek surfaces, stannic drum hits and dead-eyed postures, overlaid with Kuperus’ stern vocals. It’s a sound best presented on 2003’s Anxiety Always – a record of freaky paranoia pieces, forever on the verge of cracking up or breaking down. Over four LPs, they’ve stayed committed to their poker-faced aesthetic, exemplified by Kuperus’ marvellous album artwork showing faceless figures in the stylised postures of industrial manuals or corporate bumpf.

After some years spent dabbling in horror scores and art projects, ADULT. have trundled back into view in 2013: a 7″ release saw them cover A Number Of Names’ Detroit electro classic ‘Shari Vari’; claustrophobic 2001 debut Resuscitation got the expanded reissue treatment in Spring, courtesy of new home Ghostly; and a new LP, The Way Things Fall saw their gothic machine music sounding poppier than ever. On their FACT mix, they tackle powerhouse electronica, bleep techno, skewed pop and more – it’s a treat. Dig in below.