Listen to the track: Southern rap supremo Drumma Boy recounts the stories behind his biggest hits 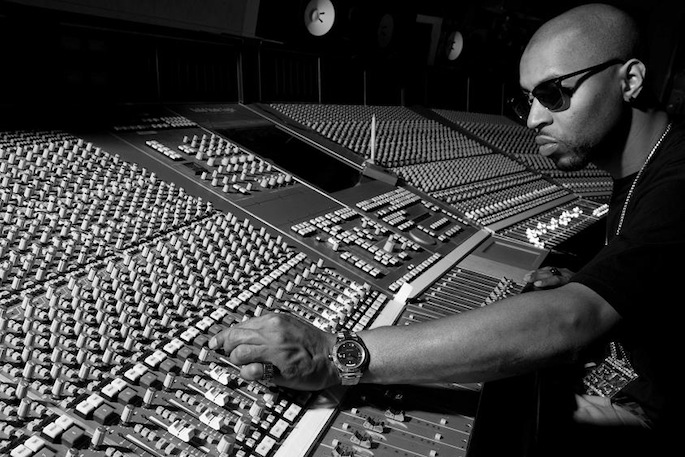 Producer Chris “Drumma Boy” Gholson has been a ubiquitous presence in Southern hip-hop for over a decade. He’s crafted hits for nearly everyone in the scene — Gucci Mane, Young Jeezy, 2 Chainz, the list goes on — and he’s picked up some fascinating stories along the way.

Always busy, Drumma Boy recently produced tracks on forthcoming albums by R. Kelly, Chris Brown, Trinidad James, and Wiz Khalifa. He also continues to build and brand his label, Drum Squad, signing R&B crooner King Heartbreaker and brotherly trio All City, and — like any hip-hop player worth his salt — he has his own clothing line, Fresh Phamily.

Speaking over the phone, the Memphis-born, Atlanta-bred beatsmith was prepared to talk about the milestone tracks of his career, among other things. An engaging personality and an animated storyteller, Drumma punctuated the chat by singing hooks and verses and mimicking beats and melodies from his voluminous catalog. Here are some of the highlights of the conversation.

I was still in Memphis: it was 2000, right before college. When I did that record, it was crazy: she had just gotten out of Three 6 Mafia, and she needed some beats. She had a small budget, and the money she paid for those beats got me back and forth between Atlanta. That’s where I hooked up with Pastor Troy and did songs like ‘Pop That Pussy’ that got me big in the strip club. Working with her was a great stepping stone: she’d always introduce me to friends and people I should work with, and it was definitely cool to have a legend in the game — the first female rapper to have a gold record [Ed. note: Queen Latifah’s Black Reign went gold in 1993] — behind you.

Ludacris and TI were supposed to be in Boyz n da Hood, but it ended up being Young Jeezy, Jody Breeze, Big Gee, and Duke; I did ‘Look’ and ‘Trap Niggaz’ for the group. At that time, it was Jody versus Jeezy: Jody was “strictly for the ladies” and Jeezy was more gangsta. My manager would tell Jody to work with me, but he was focused on bigger producers, like DJ Toomp and Nitti Beatz. At the time, Jody was leaving his fan base: girls would go crazy for him, but he wanted to be gangsta or thug and forgot about me. So I said, “Fuck it, I’ll work with Jeezy.”

The first track I did with Jeezy was ‘Standing Ovation’, and after that, it seemed like everyone wanted to work with me. That was really the beginning for me: Thug Motivation went triple platinum, and I went from being on people’s albums and street tapes to being a multi-platinum producer. After that, I did ‘White Girl’ and ‘Quickie’ for [Jeezy-led group] USDA and Plies’ [first single] ‘Shawty’, and I started enjoying my position on the radio, and with Jeezy’s ‘Put On’, I got my first Grammy nomination.

Rick Ross’ Trilla wasn’t doing the numbers the label thought it would, and I convinced him to do ‘Here I Am’ as a single: ladies buy albums, ladies control the charts. It started selling at that point of, which is unheard of [Ed. note: However, Trilla did debut at #1 on the Billboard charts].

At that point, labels and A&R started trusting me to work on projects. I executive produced Gucci’s The Return of Mr. Zone 6, which moved 150,000 copies while he was locked-up. My focus is to make the label money, whether the artist is locked up, on house arrest, or whatever: I bring success. I’m also known for taking advantage of when guys get out. I had four tracks on TI’s Paper Trail, and the first one he did when he got out of prison was ‘Ready for Whatever’.

My mother being in the choir was a big influence on that one. For the vocals, we had four young ladies from the Spelman Glee Club do the “Gucci! Gucci!” part. I wanted to do something that was a little classical but different, and Gucci loves that gothic, mafia sound; that one is very Beethoven-driven.

[On being a “therapist” in the studio] I try to be therapeutic and get guys in the mood to work. We’ll have real deep conversations to set the mood. To me, every record is a part of an emotion, so I try to trigger certain conversations. If it’s a party record, I’ll ask “what are some of your favorite party stories?” and then when they start painting pictures of the story, I try to recreate or capture that emotion.

That was the most important thing: to capture the moment and then release it: that’s why fans appreciate even the normal songs we do in the studio. I did the beat for Gucci’s ‘Beat It Up’ and Trey Songz did the hook, and we didn’t spend a fucking dollar on that record! The label didn’t put money behind it, but you can’t blame them, because Gucci was in prison, and you can’t blame him, because shit happens, but everybody says that coulda been Gucci’s number one.

That was supposed to be Drake’s single. It was right after [Degrassi: The Next Generation], and I didn’t know anything about the show, I just said “cool, let’s work.” We went to Hot Beats in midtown Atlanta. I played him four or five beats, and the fifth beat was ‘Money To Blow’. He went in and recorded the hook right there, and then put down the verse and made a shoutout (“Get to shaking something cause that’s what Drumma produced it for”).

That record ended up leaking; Hot Beats uses a lot of engineers, so who knows what happened, but it was on the Internet for like a year. There were a lot of versions of the song because Drake only did one verse and there were two open ones. Birdman calls me out of the blue, and he told me, “That’s gonna be my first single, how much do you want?” We discussed a number, and the money was in my account the next day.

Gucci had just gotten out of prison, and even though 200 or 300 people came out to support him, he wanted to go straight to the studio and get to work. Four hours after getting out, he wants to rap immediately, and I didn’t have time to cook anything up from scratch, so I gave him the beat folder I had ready for him, and he did ‘Normal’.

There were a ton of people in the studio: Brick Squad, Waka, Lloyd Banks, [Waka’s mother/manager] Debra Antney… so I went in the other room, and started cooking the ‘No Hands’ beat from scratch for Waka. There were so many people, I could barely get to my keyboard — that’s why it has those simple one note chords. I made that beat in 5 minutes: the first minute, people were talking and jibber jabbering, the second minute, everyone was quiet.

I’ve known 2 Chainz for a decade, since he was living with his grandmother; she’d ask “anything you need to eat? anything to drink?” You appreciate people like that – it’s an honor for me to be a part of that success. I just come with positive things; no matter who he’s pissed off at, Drumma Boy is in his ear: “Don’t worry about it, I’ve got some beats, let’s just work.” Any time he needed, he would come to my spot at like 2am, record, and leave at like 6am. Those are the guys I rock with, guys that I ask for a verse, they’re right there. I’m not gonna call no names, but some people you ask for a verse and there’s silence. Like, damn, for real?

I moved to Atlanta in 2003. It was my junior year in college — where I was majoring in music business — when I got kicked out for poor attendance. I had good grades, but I was making $20,000 a month and wondering “why am I in college?” My father [Dr. James Gholson, Jr., principal clarinetist for 39 years in the Memphis Symphony Orchestra] was having a conversation with the dean, who says, “You know Chris has been expelled for 6 months?” He was shocked and embarrassed, and he wanted to know what I was doing with my spare time, and to make sure I wasn’t on or dealing drugs or anything crazy — which I wasn’t, I was just in my room, playing keyboard and making beats.