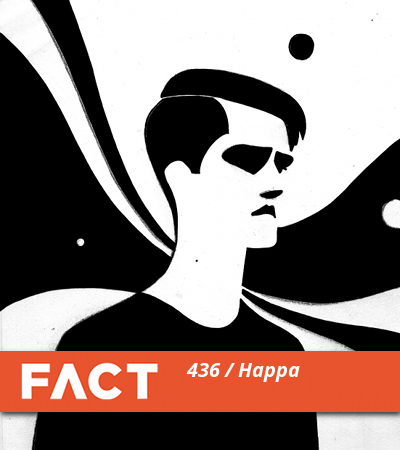 Happa, in case you weren’t aware, is really young.

And if you read magazines like FACT, why wouldn’t you be aware? Everything penned about the teenage techno producer refers to his age, and with good reason. Techno – particularly techno of the noisey, industrial variety that Happa leans towards – is so often the pursuit of the old, the bald, and the boring, that it’s great to have some young blood breathing some life into it.

Sure, Happa wasn’t the first: Blawan’s DNA is splattered all over his records, for one, but his tracks have a youthful enthusiasm to them that’s impossible to resist – a ‘yes, this is fucking it!‘ grin and clenched fists like the first time you realised that a distorted kick drum could be life-changing. And when you pair that gleeful, wide-eyed quality with chops that are well beyond Happa’s, yes, young years, you get something really special – no wonder the likes of Four Tet and R&S tapped him for remixes at 15.

Happa’s FACT mix – recorded ahead of his appearance at April’s Blueprint party, presented by The Hydra with sets also coming from Shed, Trade (Blawan & Surgeon), James Ruskin – starts with Godspeed You! Black Emperor before beating you into sheer sensory nirvana with tracks from J Tijn, Blacknecks and more. Then, after a break for Sonic Youth and Cromagnon – our kind of breather – it’s time for round two, with a brace of unreleased Happa productions. Still bumping Perc’s FACT mix from earlier this year? It’s met its match.

For tickets and more information on Blueprint and The Hydra’s Easter party, head here.