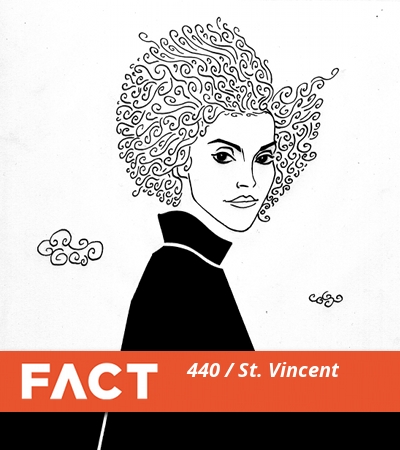 Annie Clark goes from front of stage to behind the decks on this week’s FACT mix.

After starting off her musical career as part of The Polyphonic Spree, Annie Clark turned St. Vincent for her debut album, 2007’s Marry Me. In 2009, she sidestepped from Beggars Banquet to 4AD for the release of her well-received second album, Actor, becoming one of the label’s most celebrated acts. This year, she released her fourth solo album St. Vincent on Loma Vista – an album that Clark, who’s often been described as very private, has described as her “extroverted” record.

Clark’s picked up many admirers in her musical career – Swans‘ Michael Gira, the surviving members of Nirvana, and Talking Heads’ David Byrne have all collaborated with her, the latter on an entire album in 2012’s Love This Giant – and on her FACT mix, she gets to shine a light on some of the acts that she admires. Beyonce, King Krule, Kanye West, Liz Phair and more feature.