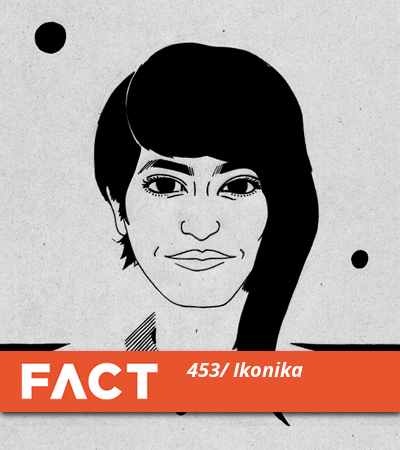 A key cog in the Hyperdub machine, Ikonika steps up for her second FACT mix.

Since debuting with ‘Please’ in 2008, Ikonika has not just become a key part of the Hyperdub stable, but one of the UK’s most reliable producers – developing her early, sample-led bleep sound into a more fully-fleshed, hardware-driven aesthetic over the last half-decade. Although her studio set-up – as she showed FACT TV recently – has expanded in recent years, her music’s never fallen into the trap of mixdowns over hooks, and her latest EP Position is as rich in melody as anything she’s done before.

She also only seems to get better as a DJ. Loosely speaking, her sets revolve around r’n’b, grime, house and techno, but even when pulling the floor out from a 4×4 pulse (as she does several times in this mix), they never feel disjointed – instead, she’s one of the best around at working club dynamics to their maximum.

Ikonika and four others from Hyperdub – Cooly G, Scratcha DVA, Laurel Halo and label founder Kode9 – will be performing at Poland’s Tauron Nowa Muzyka. The festival runs from August 21 to 24 – for tickets and more information, head here.

Get in the mood with her midweek FACT mix, which centres around her own tracks but also features Scratcha DVA, Moleskin, Neana, Georgia Girls and more.