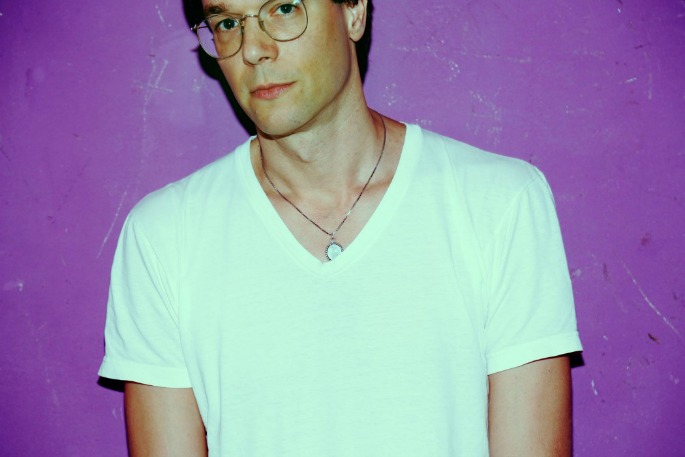 Roman Flügel‘s recording career dates back to the early 1990s, and he’s barely paused for breath since.

Flügelspotters have been spoilt for choice over the last 20 years: a slew of 12″s and albums under a diverse range of aliases (Eight Miles High, Soylent Green, Alter Ego, plenty more); impressive releases through his Playhouse label; and some sort of presence in just about every record store section you can care to think of, from ambient through techno through electro. For a proper crash course, clock our The Essential…Roman Flügel feature.

The Frankfurt producer has just returned with his second solo LP under his own name, Happiness Is Happening. Less scatty than 2011’s Fatty Folders, Flügel’s latest darts between twinkly coldwave (‘Friendship Song’), wonky electro (‘Stuffy’) and the sort of coruscating softcore house that’s long been Dial’s bread and butter (‘Wilkie). Head over to Soundcloud to stream it in full.

FACT’s Bjørn Schaeffner sat down with the producer to talk Sven Väth, writer’s block and why The Beatles are thieves.

“You can really get addicted to the feeling of having accomplished something!”

Roman, your studio is located in the Logic Records building. A monument to Frankfurt techno, if you will.

Logic Records, right. There was that Logic Trance compilation, which made waves in the early Nineties, though that release never really clicked with me. But I had strong ties to the Harthouse label.

Sven had his offices there and sat there with this entourage. Since I was a big fan of the music he played and because of him, I went to the Omen club each Friday. That was Sven’s night. He was the best DJ for me at the time. Besides his charisma, his sets were very diverse and interesting. I’ve hardly met anyone else who played such a wide range of music.

Tell us about your Omen days.

The Omen opened just a few months before my 18th birthday. I got my driving licence which enabled me to drive with friends from Darmstadt to Frankfurt. So, we went to party at the Omen. And spent the whole night there. From the first to the last record! In the beginning, the Omen was open six days a week, but Friday soon turned out to be the essential night. When Sven played. Acid and Chicago House, early Techno. There was such an intensity to that new groove. that it later infected the whole region. It came to completely redefine our notion of nightlife.

How did you meet Sven?

I always turned up early at the door on Friday night. And after a while, Sven took notice of that. Often, there was a big crowd at the door, and Sven used to handpick his guests. He let me in and one night we were both wearing the same Fresh Jive t-shirt, so we started talking. And he sounded genuinely interested, because I had already released my first records with Jörn (Jörn-Elling Wuttke, Flügel’s then partner).

In those early days as a producer, were there moments when you danced to Sven’s sets and thought, “OK, later I’ll go home and do a track for him?”

It wasn’t like that. I was never like, OK, let’s make a Hardtrance record for Sven. Even at that age, I think I had a clear idea of what I liked and what not.

“If I went all out the whole weekend, I’d be a goner.”

You were making deep house in the mid nineties when almost everyone else was into banging techno in Germany.

Back in those days, you had different groups, and those groups represented a certain sound. There was a trench digging mentality, which started in the heads of those people. That’s why meeting people like Ata (Macias) was so important. Ata was a Freigeist, a free spirit. In his Delirium shop you could find both great house and great techno records. To me, house and techno were always two sides of the same coin.

You had classical training. How did that come into play?

My education clearly antagonized everything that popular music stood for, not to mention techno. It was all about craftsmanship, discipline and attention to detail. You have to practice a lot to master an instrument. I ultimately failed at that, otherwise I’d have become a pianist.

Club culture clashed with this world.

Absolutely. The same was true for university, where I studied musicology for a time. In the curriculum, pop culture played absolutely no relevance. Musical history ended with the Second Viennese School. As an academic, you were drilled to adopt an elitist viewpoint: the one stands above the other. And of course, techno was the most radical alienation from the classical tradition. Where music is created with machines, notes don’t matter, everything comes from the gut and everyone can do it. The energy in techno was so liberating for me! It taught me that music works in different ways. And you don’t have to make a choice.

So that credo spilled over early into your work?

It’s always been more thrilling to me to try out new things. Since I’ve ventured on many paths, I ended up being quite diverse artistically. Though that’s just the way I felt – there was never any strategy behind that.

You were in a band at the time when you discovered techno.

And I left the band quickly because of techno. What thrilled me was that I didn’t have to be considerate with anyone. Because I could make all my own decisions. That sounds egotistical, but it was really the main reason why I quit the band. Though I ended up being in a sort of different band soon after.

You mean the long-term partnership with Jörn-Elling Wutke as Alter Ego or Sensorama. It’s rare to establish that sort of elementary trust in the studio, I suppose.

You find out soon enough whether you can function as a duo. Sometimes it doesn’t start from the beginning and takes time to develop. And it worked for a long time for Jörn and me, until we went our separate our ways after a long and exhausting Alter Ego tour.

Your new album is entitled Happiness is Happening. And at the end of the track ‘Wilkie’, this grotesque voice chimes in: “Save me. Because I am lonely. I thought you were happy.” Is there a message there?

We’re living in a society that craves happiness. Always. This pleasure principle is something that’s very tiresome, our urge to constantly have fun. Though I’m very much aware that I am also part of an industry of diversion. And by the way, that’s my distorted voice.

Where do you find happiness?

Happiness, of course, is not a permanent condition. Even though people are told otherwise or they believe it themselves. I try to refrain from buying stuff constantly, for one thing. I try not to partake in everything. I think it’s important to be able to hold yourself back. To keep outside of things.

Which is a challenge considering the craziness in clubland, where sparks of happiness are supposed to fly all the time.

Well, if I went all out the whole weekend, I’d be a goner. Dosage is key – check your energy level. Especially if you want to have as much fun as I’m still having these days!

You exclusively produce under your own name these days. How did that happen, considering the many monikers you adopted in the past?

It’s a convenient thing to have pseudonyms: it feels like the door is always slightly ajar, but as if you’ve never really stepped outside. Whereas your own name is your very own identity. I think I only began to realize this on a subconscious level at first. And then came ‘Geht’s Noch?’, the first release under my own name. Of all things! The kind of catchy, roaring electro threatened to put a stamp on my name forever. Which was a tricky situation. After a while I told myself, you just continue and do something different, that’s how you will get out of this conundrum. And then came came my first album on Dial. That was the point where I really felt free.

“It’s a convenient thing to have pseudonyms: it feels like the door is always slightly ajar.”

How does a typical Roman Flügel track take form?

It depends, though over the years, I’ve noticed a kind of pattern. Often, on the first day you find an idea and you think it’s really good. On the second day, you realize it wasn’t that good. And on the third, fourth and fifth day you finish it. It’s all about getting through that dark tunnel. As long as there’s a spark of light – usually an interesting core idea, something you shape your music around  – then I’m ready to go all the way.

Any advice on how to deal with musician’s block?

I’m aware that this is a problem for a lot of producers. They have a drawer full of half-finished gold, but can’t bring it to fruition. In my experience, it’s important to stay relaxed and open-minded when you get stuck. Ultimately, you should be able to finish your tracks. Which is something that’s really important me. I thrive on the enthusiasm that I get from seeing something through. Yes, it fulfils me.

You can really get addicted to the feeling of having accomplished something! The inner urge to complete a project is what drives me. It’s totally satisfying.

How do you find new ideas?

I suppose it’s a constant dialogue between what I have in my mind, what my ears hear and what my fingers do with my syths. I’m not sure how it works. But I would love to know! It definitely helps to clear your head though.

Do you sometimes say to yourself, “Shit, great melody, but I’ve probably borrowed it from somewhere unconsciously”?

Well, you can’t reinvent the wheel, can you? You would probably find an equivalent for every existing melody. It’s about the combination and re-arrangement and finding your own style and sound design. I was never big with melodies. Well, techno isn’t as a genre. Sometimes there’s a bit of a melody in my music, but it won’t carry the track.

There’s the main melody from ‘How To Spread Lies’. You said that it was inspired by a Beatles song.

There you have it! The Beatles stole it from somewhere else. Or let’s put it like this: they probably processed the same idea [laughs].