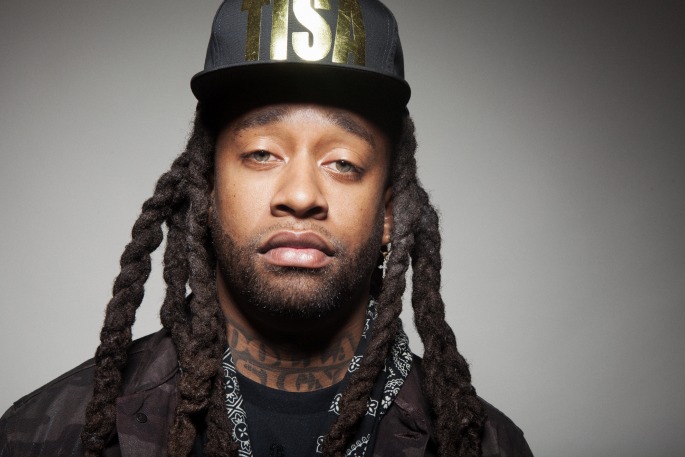 When Ty Dolla $ign starts speaking, his trademark raspy voice is so cracked I can barely understand a word he’s saying until he takes a couple seconds to clear his throat.

I would ask how he lost his voice, but just a matter of hours before our chat, I was dancing in the sweat-steamed XOYO basement as he puffed gleefully on a blunt onstage, while telling the ladies of the audience, “I wanna take, like, 10 of you back to my hotel room tonight.” So I’ve got some idea.

When his smoky drawl first blew onto the scene in 2011, Ty was spoken of by many in the same breath as The Weeknd, that year’s prince of sexy-but-tormented R&B. Even now the two are working together regularly – Ty’s late to our interview because he’s in the studio working on a verse for Abel, I’m told – but their roles are starkly different. While The Weeknd plays the predator and the aggressor, using women to run away from his own problems, Ty’s 2012 mixtape Beach House and the 2013 follow-up Beach House 2 revealed a jokey, Cabana-dwelling yet guarded character who loves to turn up but can’t escape his trust issues. Over open, carefree Mustard beats – a world away from the blacked-out pine of House Of Balloons – songs like ‘Paranoid’ and ‘Or Nah’ portrayed Dolla $ign as someone who couldn’t quite relax enough to forget himself even when in the midst of the most ecstatic early morning hours at the club.

Sign Language, which dropped in August, saw Ty flex his skill for writing fire hooks over more ambitious arrangements and with more diverse collaborators than ever before. With his debut studio album Free TC in the pipeline, a place in Wiz Khalifa’s Taylor Gang and songwriting credits for Chris Brown and Rihanna, he’s on his way to making his particular brand of paranoia pop a chart-dominating staple. And to top it off, he’s a breeze to chat to; despite having performed and recorded in both Paris and London in the past 48 hours alone, he listens appreciatively and laughs warmly throughout our phone call. Read on to find out more about why he’s not just making sex music any more, why he wants to tour with Ed Sheeran and why he’s the man you should call if your toilet’s broken.

How did you find the crowd last night?

Yo, they were turned the fuck up, man. I’m surprised because I’m not from anywhere around here, and to see people fuck with my shit like that is fucking incredible.

Have you had a lot of that kind of response in Europe in general?

Europe’s been great, I think I might have found the girl that I want to marry. Man, everybody just turns up.

Wait, can we go back to the girl you want to marry?

Not necessarily in Paris. She did come to Paris though. [laughs]

A while back you told The Fader that you’re nastier in real life than you are in your music. Is that still true, given you’re clearly so busy?

Yeah I’m fucking super busy, I don’t have fucking time to myself almost. But sometimes, when they try and rush me, I tell ‘em “fuck you,” and I close the door and I take care of all my regular life shit. But it’s been non-stop. I just got off the tour with Wiz, I had like, a day at home – but then it wasn’t a real day because I was straight in the studio and doing interviews and that type of shit. Now, I get off the tour on the 12th and then I have to go straight to the studio and finish my single on the 13th, and then I’ve got to fly to Nashville, and then…I’m never gonna have time again. I love it.

You tweet a lot about how thankful you are, and you said it a lot last night, too. Do you feel like you’re living a bit of a dream right now?

Yeah, it’s a dream, but even in real life I’m thankful for everything. I was thankful before I even got on, you know, just for having the music in me, because I’ve been around a lot of people and a lot of people just don’t have it. I can really pick up any instrument, and play any song that comes on. God gave me that, I’m thankful for that. And I can do other shit that has nothing to do with music, like if we’re just at the crib, and something fucks up with the faucet or the toilet, I can fix that shit. I’m just blessed all around. [laughs]

Cool. So how did you come to write ‘Loyal’ for Chris Brown?

‘Loyal’ was originally for my bro Bobby Brackings, I wrote that song for him. But then he wanted something changed on the beat. So then Nic Nac changed it, and then when he changed it I guess his manager played it for Chris Brown. Chris recorded it, and then the day before they were gonna put it out his manager called me like, “yeah so, we’re gonna put it out tomorrow. Whatever you want, it’s cool.” I was like, all right. Of course, I’ve always wanted to work with Chris Brown. When it comes to stage performance, who’s fucking with Chris Brown?

Did you expect it would blow up the way it did?

Um, nah. You never know with songs like that. I recorded this shit in my living room. So I didn’t know it was gonna played like crazy everywhere. But I guess now, shit, all the songs we’re doing are pretty great, so, God is good.

A lot of your songs are about not trusting women, or people in general, and being wary – is it getting harder to trust people now as you get more famous?

I learned my lesson. It’s the same all the way around. Whether I was doing this shit, or I was just doing real estate, I would still not trust motherfuckers.

I heard that you’ve been working on a track for Rihanna’s new album, how did you get involved in that?

I’m just lucky. She wanted to work with me. I was talking to her, and I was like, “Yo, how did you even hear about me?” She was like, “Drake.”…We did a couple of joints, one joint she really liked, so I can’t wait to hear what she does with it. She’s amazing. We talked, we chilled, several times.

Is that generally what your collaborative process is like? Do you like getting in the studio with people?

Yeah I like getting in the studio with people, more so than just writing a song for a person. I don’t like wasting my fucking brain time.

Sign Language has got loads of features, did you get in the studio with everyone?

I got in the studio with everyone basically. A few people I sent it to, and then they sent it back, but most people on there, they were just in the studio.

There’s a couple of curveballs in there; I was surprised to see Ed Sheeran on the tracklist.

Ed Sheeran’s a homie. You know, he’s a real musician. I first saw him one time on the plane, back in the States. Ed Sheeran was on [the in-flight entertainment]. I was just bored as fuck on the plane and I’d never heard of him, so I watched his show on there. He got on the mic, and he had some shit on his foot, I guess a looping machine or a looping programmer or whatever, he fucking does the kickdrum and the snap with the guitar, and he loops that, and then he plays the guitar, does a little bassline, does the chords with the guitar, and then he does the first note of a harmony, then he does the second note and the third note…I was like, God damn, this motherfucker’s incredible. I wish I could – I know I could do that shit, but I just didn’t know about the looping or whatever. Turns out, my publicist from New York, he’s the same guy who works for Ed Sheeran, so he hooks me up with him, and then Ed Sheeran started doing remixes of my songs, a capella and acoustic and whatever. I’m like “Yo, I’ve gotta work with this dude.” So I sent him the song and he sent it back like, the next day. And I put it out. And I’m gonna fuck with him on my album, hopefully I get to get on his album, someday we might tour together and go crazy.

I feel like he got into the Dolla $ign spirit quite a bit with his lyrics.

You play a lot of instruments too though, right?

Yeah, all of them. I don’t play trumpet or saxophone, no brass, but everything else. Most of my songs I play something on, unless somebody else did the beat.

Sign Language feels richer and fuller, like you’re slightly moving away from that ratchet sound. Was that an aim of yours?

It wasn’t an aim, I was just doing what I felt at the time. [Also], I knew everybody was going after our original sound, and I’m like, “alright, what can I do different? If I start doing this, will motherfuckers start copying this shit?” So that’s why it’s different.

What about the album, what can we expect that to sound like?

Who have you worked with on the album?

I got YG, I got Wiz Khalifa, and I got Kendrick Lamar. I’m not gonna try to put so many features on the album, because it’s my album. Like on the mixtapes, they’re mixtapes, so I’m mixing shit up and putting everybody on there. But on the album, it’s gonna be more like only me and my homies, my closest homies, you know?

Sounds like we’re getting the real Ty Dolla $ign.