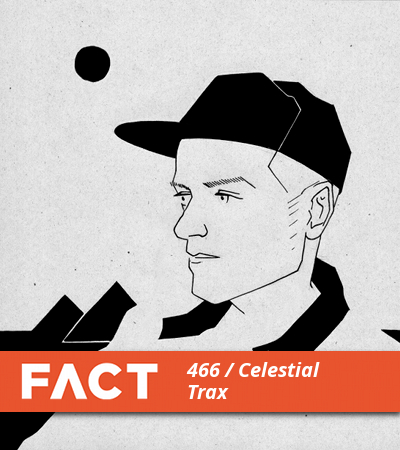 In an age where DJs blending genres, scenes and regions is the norm, it’s more crucial than ever we have people who do it well. And Celestial Trax is one of the good guys.

Raised in the UK but based in New York, Celestial Trax has been distorting grime, hip-hop and regional dance styles (footwork, Jersey, etc) with an approach and studio set up that feels more in tune with the experimental dance of labels like Not Not Fun and 100% Silk – as he told Liminal Sounds, he uses “synths, guitar pedals and a trusty old Korg Electribe” to produce, while live he adds a Kaoss Pad, controller and more to the mix.

In short, he’s not your average dance producer, with his Paroxysm EP, released on Rinse this year, swinging between sharp, snapping drums and submerged quasi-dubstep atmospherics. Like his sets, it allies itself with a lot of different genre trademarks, but given the right amount of time and attention whisks you away into its own world.

FACT mix 466 blends Jersey club with squealing synth loops; grime and ballroom mutations with underwater rap, and it works like hell. Check out more Celestial Trax releases on his Bandcamp.