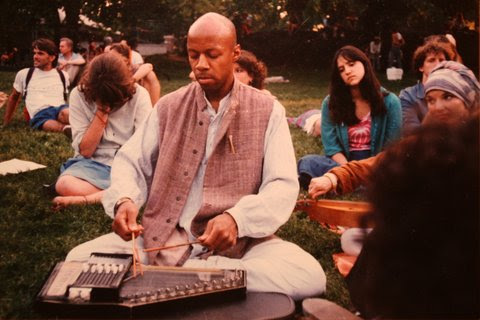 Not your usual performance.

Laraaji, a new age and ambient pioneer and laughter meditation workshop leader, is bringing the Peace Garden tour to Europe in September and October with a string of dates combining yoga workshops and performances.

The tour will stop at London’s Barbican as part of the Transcender festival. The venue is describing the event as a workshop combining yoga exercises and deep listening culminating in a performance by Laraaji on electronic zither, mbire, gong, chimes and vocals.

Aside from the UK, the Peace Garden Tour will also stop in Belgium, Holland, Sweden and Portugal.

Ahead of these dates Los Angeles-based Leaving Records is re-issuing three of Laraaji’s early works for the first time on cassette and digital. They are All In One Peace: Lotus Collage, originally recorded in 1978, Unicorns In Paradise, from 1981, and Connecting With The Inner Healer Through Music, issued in 1983.

You can hear selected excerpts from the releases via Soundcloud and pre-order the cassette boxset directly from Leaving Records.