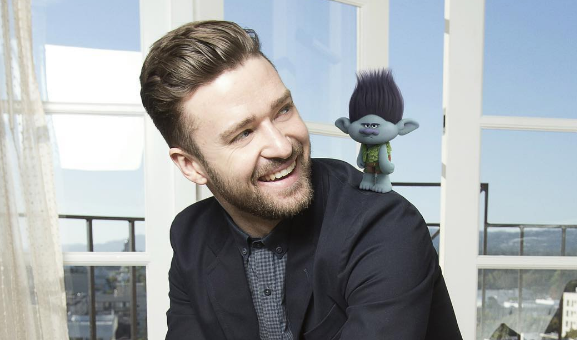 Update, May 6: ‘Can’t Stop The Feeling’ is intended for the Trolls soundtrack.

Timberlake has dropped a video for the track that features the cast of the forthcoming Dreamworks film, including James Corden, Anna Kendrick and Gwen Stefani.

Justin Timberlake has announced the release of his new single ‘Can’t Stop The Feeling’, which is to drop tomorrow (May 6).

According to Idolator, the track has been produced by Swedish hit-maker Max Martin, who Timberlake worked during his time in N’Sync.

Last month, the singer shared a picture of himself in the studio with Pharrell and long-time collaborator Timbaland, who told TMZ that the trio are working on new, country-inspired music.

It’s not yet clear whether tomorrow’s single is from this project, or from a new movie project Timberlake is involved in. It was recently announced he is also writing and performing new music for a film based on the Trolls toy franchise, as well as voicing one of the characters.

According to The Hollywood Reporter, he has signed on as the executive producer of Trolls and will voice the character of Branch, “a hilariously hardcore survivalist who hides his surprising true colors.

“I have always envisioned bringing the two worlds of film and music together for one epic event [and] couldn’t be more excited that they will collide in DreamWorks’ Trolls,” the ‘Suit & Tie’ artist said back in January. “This film is very special, the music is going to be very special and I can’t wait for everyone to experience it all.”

Featuring the voice of Twilight actor Anna Kendrick, the film is directed by Shrek Forever After duo Mike Mitchell and Walt Dorhn. It’s due for release in November.