Each week on the FACT Singles Club, our writers work their way through the best, worst and weirdest new tracks.

This week, Nils Frahm teams up with Bobby De Niro for some “soundtrack austerity”, ScHoolboy Q does the right thing by reassembling the TDE supergroup, Arca shows off a strong set of pipes, and we endure the latest comeback from indie’s toughest cockroaches.

Plus, Kanye’s little helpers make perfect pop and there’s the debut single proper of Midlands MC Lady Leshurr, who transcends the controversy over her “excessive sampling”. All round, a week of fairly listenable music! Who knew?

Chris Kelly: An absolutely massive single (her first official one, apparently?) that brings a much-needed blast of feminine energy to the grime scene sausage fest without sacrificing an ounce of intensity. (9)

Daniel Montesinos-Donaghy: 2011’s ‘Lego’ was Lesh’s first real attempt at a big single, a brittle would-be-banger in the ‘Look At Me Now’ style. It’s a fine song, but not the best representation of what makes Lady Leshurr appealing: her speed, dexterity and cheekiness. ‘Where Are You Now’ is perfect for her, a colourful and fun riposte to people leaving the grime scene, lacking the bitterness a song of this type could have. In a few minutes, you get that Lesh is smart, focused and positive, more likely to make a nyah nyah voice and keep it moving than send for a weaker MC. (Wiley is, as always, welcome, and allows me to beg the FACT readers to buy this T-shirt for me.) (7)

Tayyab Amin: Feeling some uncertain type of way about this one. It’s a grower and she goes in for sure, but bearing in mind grime’s past couple of years, is Lady Leshurr gonna just @ Chip/Dizzee or what? I love how the video reads like a Channel U take on Busta Rhymes’ old sets, but I can’t tell whether Wiley’s absence is a par or not. Anthemic, in theory. (6)

Haley Potiker: What I love most here is the video. Lady Leshurr’s performance is on point, way more than most artists, including superstars, manage to be. Her wardrobe and makeup and nails are perfect, and those backdrops? Girl’s got vision. During Wiley’s verse, in what should be an awkward gap due to his non-presence, Leshurr makes up for it with a dance break. Side note: where do I get a floor-length teal fur? @PETA (8)

Haley Potiker: The Pixies are back and hitchhiking South (but kinda West). Guitars chug, snares are worn down, the 1960s are missed. It’s surf rock, so the same few phrases get repeated over and over. (6)

Zoe Camp: Certainly, this track’s better than anything off Indie Cindy, the Pixies’ depressingly awful comeback album. The way Frank Black’s haggard yelps pierce the choppy, Gun Club-esque racket, you almost get the feeling that the old Pixies are back – but the frontman’s solo material remains more cohesive and stylistically sharp. (4)

Chris Kelly: It’ll never be the Pixies without Kim Deal, but Paz Lenchantin is the next best option, at least. The band’s first single with Paz on bass and vocals is raucous, weird and already more memorable that Indie Cindy. Is it just me, or is this reminiscent of Ministry’s ‘Jesus Built My Hotrod’? It’s probably just me. (6)

Daniel Montesinos-Donaghy: This is going to leave a LOT of people disappointed, but it is absolutely fine, a straight-up snarler evoking rock’n’roll’s favoured topics of the open road and lawlessness. You won’t remember much of ‘Um Chagga Lagga’ after it has beaten you over the head, but memorable songs aren’t everything, guh. (6)

Tayyab Amin: I’ve never listened to Pixies before [OMG – ‘90s Ed.] and I don’t speak ‘Um Chagga Lagga’ but I’m down with it, whatever it is. Totally swept up by this runaway train of a tune. It’s the kind I’d wanna hear in some small dirty venue, and I’d definitely briefly consider joining the pit for it – and then back out, ‘cause this body ain’t getting any younger. Though that’s moot considering this band seem to be in great shape. (7)

Daniel Montesinos-Donaghy: This is a contained dose of Soundtrack Austerity, the sophisticated, semi-melodic droning that has risen in the past decade to become the sound of thoughtful cinema, of Serious Art, regardless of the context. It’ll do, it’s fine, it’s just a bedding. Atop is De Niro slowly, slowly telling a refugee’s tale, a choice that plays off recent history (the ongoing refugee crisis) and his on-screen legend (it’s hard to shake the image of the child Vito Corleone navigating through Ellis Island in Godfather 2, especially as the accompanying short film finds De Niro walking through the Island’s disused medical area). If anything, it’ll remind you to have empathy and to show empathy, and that’s far more important than critiquing a chord structure. (6)

Zoe Camp: Most movie soundtracks are introspective, but Nils Frahm’s score feels particularly intimate, built around little more than a sparse piano and ample sonic space. It’s the perfect mirror of our shared fear and disillusionment in an age of paranoia and anxiety: while explosions, shootings, and the migrant crisis may stoke our uncertainty, terror’s true nature proves far more insidious, and by extension, more haunting. (6)

Haley Potiker: While listening to this I went to the Liberty Ellis Foundation’s website where I found information for nine Potikers who came to America from Kassa, Hungary in 1910. The ship they traveled on was called the Cincinnati. The parents were Hermann and Frieda, the children, in order of age, were Regina, Yeno, Ludwig, Anna, Niklos, Ferdinand, and Ilona, who was born on arrival at Ellis Island Hospital. Now I’m on a Wikipedia page for Kassa, in a sub-section titled “The fate of Košice Jews”. Thanks, Robert DeNiro! (4)

Tayyab Amin: Robert De Niro’s reading is haunting and gripping, and the perpetually imminent, all-encompassing vastness of the harmonium partners well with it. Still, I don’t think this manages to work as a solely audio narrative – these sounds don’t conjure imagery, they fill in its gaps. Ultimately, the most memorable, laudable thing about the piece is its constant sense of uncertainty. (6)

Haley Potiker: I love when Kanye and Bon Iver work together, but I can barely tell why Kanye’s credited here. Is he “featured” in the sense that he liked the song and stumbled into the video shoot? Justin Vernon, on the other hand, steals the spotlight with those Auto-Tuned vocals. The accompanying visual features the main artist, Francis (“the Lights” is just his laptop), who does an unsettling dance before meeting up with Vernon to perform some jilted choreography. Regardless of the mechanics, it’s a semi-perfect pop song. (7)

Zoe Camp: Confession: I can’t stand Bon Iver’s music. Where some hear Justin Vernon’s soprano and cry tears of joy, I just hear a grown man warbling like a sad, stoned bird. Maybe he’s the musical equivalent of cilantro or something – and my god, is this track full of cilantro. (2)

Daniel Montesinos-Donaghy: I feel some unearned pride at any success Francis and the Lights get, seeing as I once watched them play live to uninterested jean shoppers in a Diesel store. Kudos to them for replacing Mr Hudson in Kanye’s synthetic yuppie role-play, but also for that video: if Justin Vernon dancing doesn’t make you smile, you must not like earnest white boys over-exerting themselves. And that’s my review. (6)

Chris Kelly: This is actually the basis for Chance’s ‘Summer Friends’, and while it doesn’t pack the emotional punch, it’s a moving song in its own right and fits nicely on the Coloring Book–The Life of Pablo axis. Actually being able to hear Kanye on the hook should be a tinnitus test, though. (7)

Tayyab Amin: As someone who has rinsed Coloring Book since it dropped, this doesn’t merely signpost me towards ‘Summer Friends’, and that’s a good thing – it’s truly its own single. So it should be, with credits that include Rostam Batmanglij and Ariel Rechtshaid. It’s a welcome addition to the always-marketable catalogue of mopey tearjerker white boy R&B. While there might not be much to differentiate Francis from an amorphous stew of Krell, Blake and Vernon quite yet, this begs to be sung along to and you’ll melt as you do it. (8) 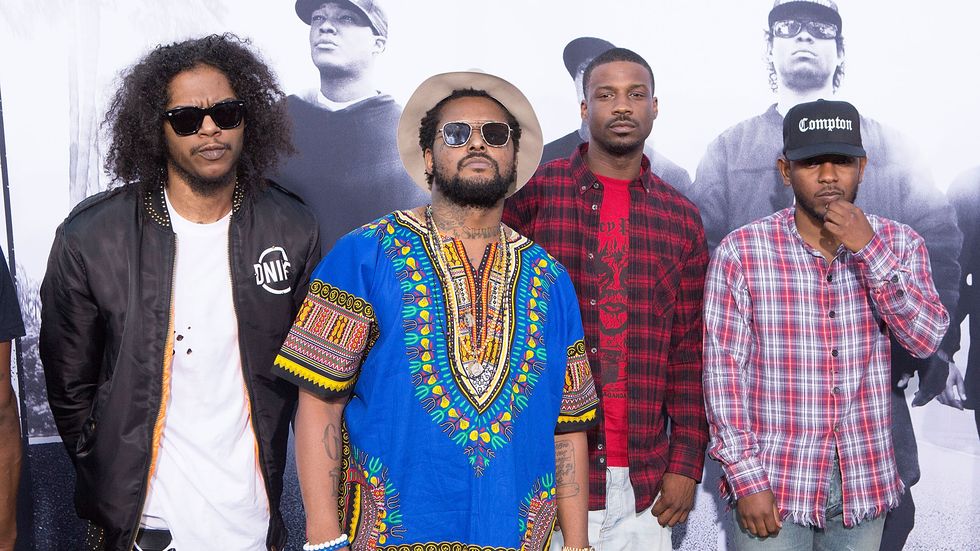 Daniel Montesinos-Donaghy: I, ummmm, can’t find a single working link of the ‘THat Part’ remix anywhere on the internet [Same. Sorry everyone. Sort it out TDE – Ed.] but I listened to it last night and it’s very good. ScHoolboy Q is a beast. (I know that’s not a real review but it’s all I got rn.) (N/A)

Chris Kelly: Kendrick has been on his own level for so long that I often forget about Black Hippy. Unsurprisingly, his verse is the best here, but his presence makes everyone step up their games. Jay Rock and Ab-Soul sound rejuvenated, and ScHoolboy ditches the forgettable verses from his original for a Hot Take on Alton Sterling. First posse cut I’ve enjoyed in a while because everyone seems to give a shit – That Part’s usually missing. (8)

Tayyab Amin: Firstly I gotta shout out this beat – it takes me back to all that super lyrical rap that dropped in the early ‘00s, without sounding retro. Importantly, even on the Black Hippy remix Q sounds the best on his own beats – the content’s enough to make you pause and turn cold, but so’s the delivery. I appreciate them making a posse cut interesting beyond the pure virtue of being a posse cut. (8)

Haley Potiker: TDE is one of the most visible rap groups in the world. With the Interscope backing and Taylor Swift collabs and Kanye co-signs you’d expect someone would have told Ab-Soul that calling himself 3Pac was a stupid idea. Speaking of Mr. West, the remix loses his happily unhinged energy but in its place are superb turns from Kendrick and especially Jay Rock, who continues to make a case for himself as the group’s most affecting writer. (9)

Zoe Camp: Happy to see Kanye’s verse cut in order to preserve this timely Black Hippy reunion. We really need these guys right now, and not just for their rhymes; as MCs more-or-less-immune to the wayward influence of materialism and undue hype, demarcated instead by community-building, social activism, and narrative strength, Schoolboy Q, Kendrick Lamar, Jay Rock and Ab-Soul represent four of the most woke, noble-hearted MCs out there, keeping the fires of hope burning bright when the flame appears all but snuffed. (8)

Chris Kelly: Loaded with the devastation of heartbreak, ‘Sin Rumbo’ finds Arca’s vocals at the forefront of a chilling incantation that serves as the vulnerable heart of Entrañas. Or, considering the title, should that be vulnerable guts? (7)

Zoe Camp: Damn, Arca’s got a great set of pipes. I’m getting a strong Scott Walker vibe from the producer’s ghostly, lilting croon, as well as the gauzy, brittle arrangements encasing it – eerie, elegant, and unexpectedly immersive. (8)

Daniel Montesinos-Donaghy: A gothic, nigh-operatic assemblage of skittish programming and baritone pleas, this is lush and difficult music. The theatrics may turn you off – from here, the more pitch-black pomp, the better. (8)

Tayyab Amin: I love how the swelling of living, breathing bass both complements and isolates the detail in Arca’s voice. A few years ago there was a real bubble of vocal electronic music that focused on chasmic instrumentals, but here there’s something devastatingly hollow in Arca’s singing. It’s a fantastic, emotionally crushing operatic soliloquy. (7)

Haley Potiker: I am actually horrified by this video. I know the song’s about being emotionally wounded but I’m more concerned about how he’s actually wounded. Anyway, it’s haunting, but maybe doesn’t move enough for my tastes. (6)