FACT Rated is our new series digging into the sounds and stories of vital breaking artists. Next up is Clapton rapper Stefflon Don, whose new mixtape Real Ting has been stopping fans of dancehall-tinted hip-hop in their tracks since its release earlier this month. Michelle Kambasha asks her about her rise so far, comparisons to Nicki Minaj and why her live shows are going to feature “batty and breasts everywhere.”

In 2012, Stephanie Allen was a hairdresser with dreams that extended far beyond the four walls of her council house-cum-salon. A few years later, on the brink of 2017, those fantasies are fast becoming (to borrow the title of her new mixtape) a Real Ting. A ferocious blend of dancehall laced hip-hop and sexy R&B-pop with crossover potential, that tape makes plainly obvious why the co-signs from kingpins like Skepta, DJ Khaled and Jeremih keep on coming. “If your main focus is on being the best, you can break anywhere,” she bellows down the phone without a hint of hesitation, the stakes high but the pressure evidently off. “That’s my focus. With my grind, I go in. I feel like I have potential to be the biggest artist.”

Born in Birmingham to Jamaican parents, Allen spent her formative years in Holland before moving to London at the age of 15. As a result, she’s fluent in Dutch but speaks with a heavy London accent that in conversation as on record dips in and out of Patois, and carries the certainty and confidence of the kind of person that’s travelled, situated and assimilated. Music was a constant in her life no matter where she was: her parents were musicians, and had siblings similarly music obsessed.

It was her siblings that introduced her to rap, steering away from her first love, singing. “I started getting better and better and then I was like, ‘nah I want to be a rapper, this is way better than singing!’ I always knew I wasn’t going to be doing anything like hairdressing forever. I always knew I was going to be doing music. I knew there was a point when I was doing music, that there’d be a point where I’d get it. That’s when I become the real ting.” 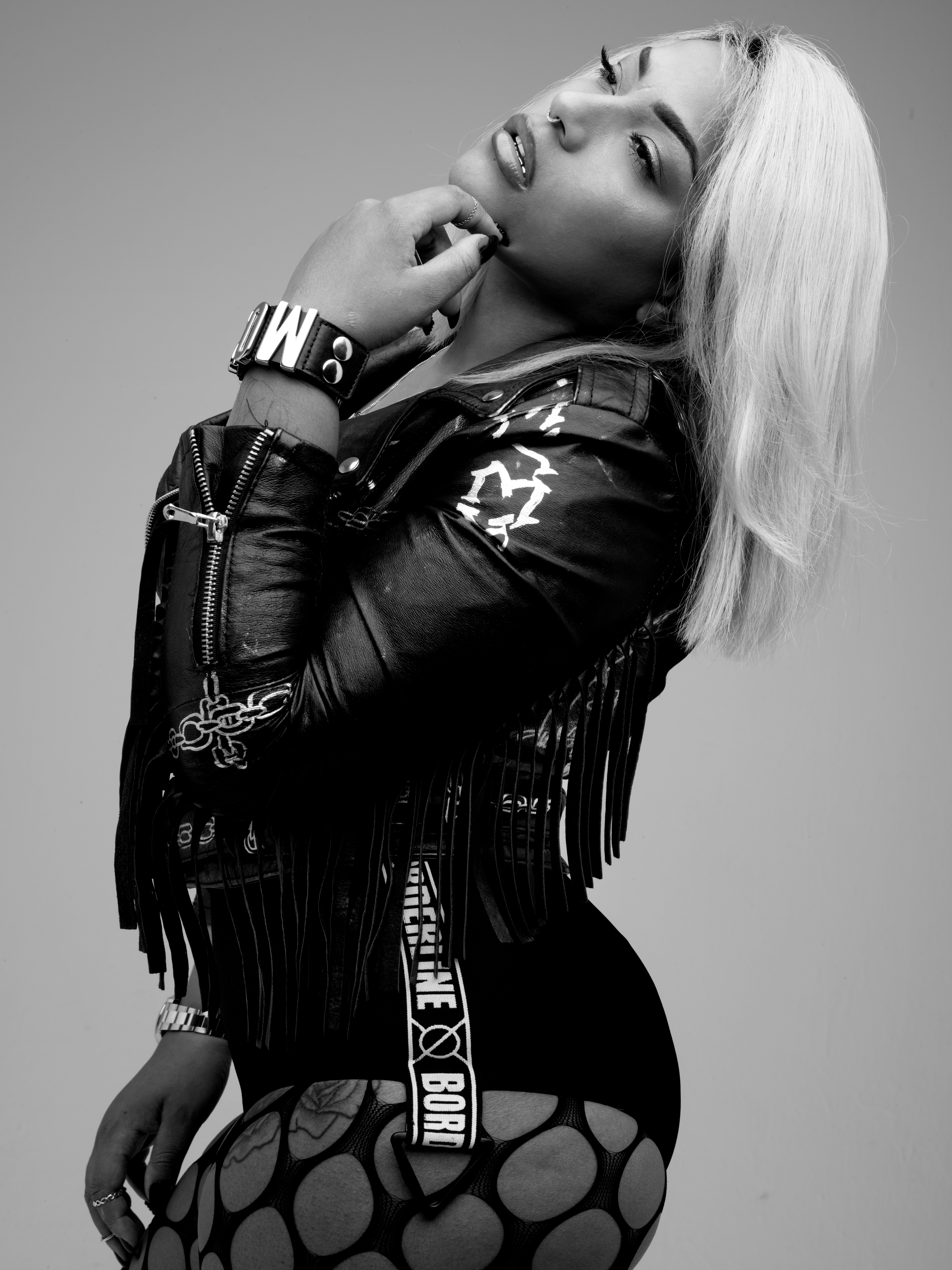 “For some reason, men feel like they’re superior to women. But they’re not and I’m here to let them know that they’re not.”

Allen’s rise began in 2014, gender-flipping on instrumentals for hits like Rae Sremmurd’s ‘No Type’ as well as street tracks like Section Boyz’ ‘Lock Arff’ and ‘Uno My Style’. By 2015 she was creating her own videos, co-signed by the likes of SB:TV and Link Up TV, before inking a deal with Sony this year following show-stealing cameos on tracks by Lethal Bizzle, Jeremih and more. When she dropped the slow, uncompromising ‘Real Ting’, her new mixtape’s title track, in November, its accompanied video quickly rocketed to more than half a million views.

With success, inevitably comes kinda lazy comparisons. What does she make of those likening her to that other female rapper who dons coloured wigs, oozes the same bodacious sex appeal in abundance, and whose raps also infuse a inner city twang with Patois? “Nicki Minaj is dope, she’s a good artist. I do want to be seen as an individual artist, but that’s what happens! Every new artist gets compared to someone and to get compared to someone as good as she is – the best doing it.”

The comparisons aren’t completely lazy, but they certainly don’t tell a complete story. “I love Lil Kim and Foxy Brown. Growing up, it was them two – Eve as well. The rawness and the confidence… They were not afraid to say whatever they wanted to say. Making sure every time they came on a track they dominated it. That’s what I love. And every track that they were on, I was waiting for them, and that’s what I want to capture.” She describes her own music, influenced by the great dames of hip-hop, as “raw, edgy – I say what I want. I feel like I sound good on the ear – turn up music.”

On ‘Real Ting’ Allen raps: “labels on ma back cuz they know I’m gonna win/Yo, I’m the captain of this ting.” From the hard-hitting ‘Narcos’ to poppy ‘Family Ties’ which features her rapper brother Dutch and king-of-the-feature Donaeo, the sense on her tape that she’s destined to win is hard to shake. Raw is the operative word to describe her style – fast, sexual and unrepentantly so. Although we’ve become used to female rappers – in part thanks to Kim and Foxy – spitting lyrics that are defiantly graphic and hedonistic in their description of sex, money and men, you only have to peep at some of the YouTube comments under ‘Real Ting’ to know there are still a lot of men who’d prefer their women to lay down and think of England than rap lines like “we ain’t even fucked/all he did was eat the box.” This isn’t lost on Steff.

“All that double-standard rubbish, it’s rubbish! Women are women, and men are men. We all hurt the same we all feel the same. And I don’t know, for some reason, men feel like they’re superior to women. But they’re not and I’m here to let them know that they’re not.” She adds that if you’re one of those men who feel slighted at the sight of young woman proclaiming her sexuality, it may not be wise to come to one of her shows. “All I can say is you can expect the maddest thing to happen. I’m gonna have girls twerking on stage. I’m gonna have fans grabbing the mic and singing along so you lot better know the tunes. Just batty and breasts everywhere!”

Next up for Allen is more music: ’”I’m never checked out baby! I’m dropping this mixtape and next thing I’ll be back in the studio.” With all the hype around her, and a spot on the BBC Sound of 2017 poll to her name, she says she feels she has nothing to prove – that the only thing she feels is excitement. “I am really what everyone believes that I am. So that in itself, I have to live up to that. I feel I can’t stop. I can’t sleep sometimes.”