FACT Rated is our new series digging into the sounds and stories of the most vital breaking artists. Next we meet Klein, the South London singer and producer who fuses her love of Atlanta rap weirdos and Andrew Lloyd Webber on grainy pop collages which have drawn comparisons to Micachu and Hype Williams. With copies of her record already reaching three figures on Discogs, she tells Chal Ravens why she’d rather be on Hot 97.

It’s easy to get the wrong idea about Klein. On the cover of Lagata, her latest EP, she stares out at us – nonchalant, open-mouthed – from behind a desk in a shop stacked high with decorative china plates. It’s a dissonant shot, apparently matched by the bizarre collage of melodies, textures and noise that makes up the record itself: ferociously manipulated samples dissolving into ugly guitar squall, broken piano chords circling into themselves, quivering R&B vocals shrouded in metallic drones. With comparisons to the deconstructed noise-jams of Hype Williams and Micachu, Klein’s music has quickly found fans in experimental circles, picked out by staff at online store Boomkat and written up in The Wire magazine.

But in real life, Klein betrays none of the sour antagonism of her music’s darkest moments; she’s serious about her craft yet utterly unserious about pretty much everything else. As she says repeatedly: “I take the piss out myself, ‘cos it’s funny.” At her suggestion, we meet at the Wetherspoons pub in Lewisham, just down the road from the flat where she records most of her music in her bedroom. Quick to crack a joke and constantly lapsing into goofy voices, she talks at a speed that would make a stenographer nervous and is happy to admit to her ignorance of the “experimental” electronic music she’s been lumped in with, instead citing Soulja Boy, Brandy and Andrew Lloyd Webber among her influences. In that sense, it’s refreshing to realise she actually is an outsider – rather than just styled as one.

Earlier that week Klein had played a low-key show in Clapton with Lord Tusk and Tribe of Colin, the three artists taking it in turns to play a song, “like on Jools Holland”. Her live set is a work in progress, often as simple as singing and freestyling over backing tracks, or having her friend and occasional collaborator Jacob Samuel playing the tracks through Ableton. But usually she’ll use a sequencer and a drum pad, remixing her stems to create different versions of her tracks, sometimes with unintended results. “My manager was like, ‘You’re sounding more techno,’” she laughs. “I’m like, ‘I know – it’s the sequencer, it makes everyone techno! When I did the set with Lord Tusk I couldn’t stop laughing – ‘Klein, you’re ready for Ibiza you know’!”

Her records might be filed alongside Dean Blunt and D/P/I, but it isn’t exactly “electronic music”, and she freely admits she’s impatient with technology, preferring to manipulate samples and recordings in Audacity, “this really shit, like, year nine audio mixer – you can just layer samples in it.” Typically she’ll head to a friend’s house to borrow a piano or guitar for a few hours, recording hours of material to chop up later.

“I like recording stuff on my phone and seeing what I can change it into – like a door knock, pitching it up so it sounds like a violin,” she explains. “And I use my voice, that’s the main thing I use as an instrument. How high can I go, how deep can I go?” It’s strange that, from Klein’s perspective, vocals are the core of her music. On Lagata and its predecessor, 2016’s Only, her voice is often obscured – fogged in distortion, pushed low down in the mix, sometimes missing entirely as she layers up her eerie ambient worlds. But as far as she’s concerned, she’s making pop music. Klein’s lyrics combine pop simplicity with diaristic honesty, and often a subtext of silliness – on ‘come 2 bed’ her voice quivers as she pleads, “I need you to come into my bed.” The song, she tells me, is about her imaginary seduction of Hot Mugshot Guy, the internet-famous crim-turned-millionaire. 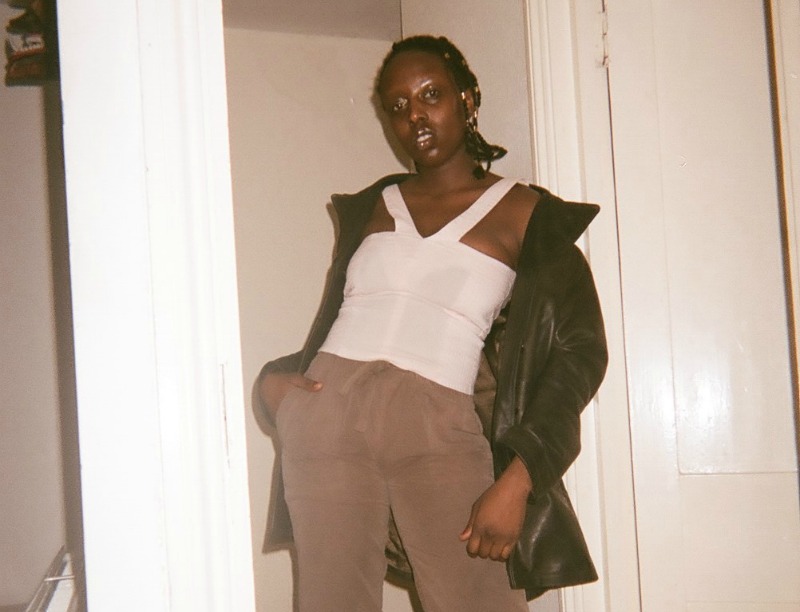 “I listen to a lot of ratchet Atlanta music. It’s a mixture of that and really liking Pavarotti”

Klein – whose mononym seems to be a disguise as much as a stage name – is working on her music full-time now. Her family still have no idea what she’s up to. “Anything I do is not really on their radar. My mum and dad don’t read any music magazines so there’s no way. I went to America and met people like Dev Hynes,” she laughs, “and I was like, how would my mum even come across him?” She’d rather tell her family about her career with a TV appearance. “Yeah, collecting a Grammy – and my mum will be like, ‘Eh! What are you doing?’ Then I’ll get, like, deported to Nigeria and it’ll be the end of the end of Klein,” she says with a mocking whine. As a young girl she spent five years living with her grandmother in Surulere, part of Lagos. It wasn’t a particularly musical household, though her grandmother would sing around the house and introduced her to Nigerian films like Saworoide (from which she borrowed the name Lagata from one of its characters). Back in England her mum gave her a keyboard and she started to play around, keeping her music mostly to herself.

The Klein project emerged spontaneously; she never saw herself as a musician. “I used to do loads of refixes of pop songs on my piano, but none of my friends liked it – they were like, ‘It’s really weee-ird!’” Soon she went from performing droning Carly Rae Jepsen covers at open mic nights to focusing on her own music.

“When friends who’ve known me for years see me [perform] they’re weirded out, ‘cos there was no signs that I ever wanted to get into music – it was something I just did at home for fun,” she says. “I didn’t go out that much when I was younger, I spent a lot of time at home figuring stuff out, like, it would be cool to make this drum out of a table noise and fuck it up.

As a teenager she idolised Brandy, but also listened to a typical mix of high school favorites like Arctic Monkeys and Foo Fighters. These days she gets most of her new music from listening to Hot 97 and The Breakfast Club, she says, and from TV shows like Love and Hip Hop Atlanta. “I don’t really listen to that many UK artists, but [I do listen to] a lot of ratchet Atlanta music. It’s a mixture of that and really liking Pavarotti. Those two merging is where my influence comes from. The Atlanta approach of not really giving a fuck about anything.”

In a way, she’s making music that she wouldn’t seek out herself – her songwriting doesn’t map onto her influences. “Totally, and when I make it I’m either cracking up or I’m going, ‘Oh my god, this is so ridiculous.’ I’ve got this song ‘With You’, which is actually my favorite, but at the time I was about to put it out my friends were like, ‘Um, this is weird!’ It’s like a musical theatre song – ‘I’ve been won-der-ing!’ But I was like, yeah, this is so jokes! I was thinking of theatre, like Andrew Lloyd Webber. I saw Phantom of the Opera and it’s so sick.” 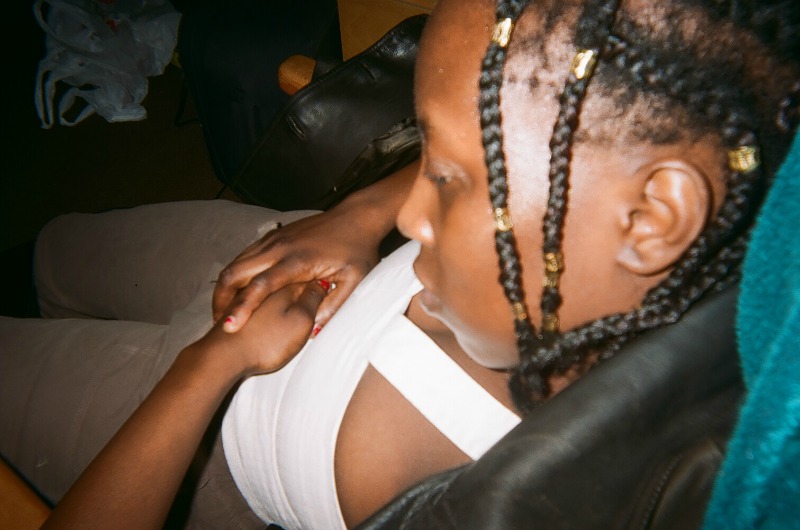 “It’s been really weird seeing people get into it. If someone’s into a certain song, I’m always like, why?”

Considering the comparisons with Hype Williams and Micachu, Klein points out that her rough-edged sound is a product of necessity rather than an aesthetic choice – DIY in the classic sense. “I couldn’t really afford any stuff, like a grand piano and all that, so I had no choice but to do it in that DIY way, ‘cos I didn’t know how else to make stuff. If you don’t have a drum kit, of course you’re gonna have to get your dictaphone out and record fake drums and chop it up. I didn’t really like using presets – a lot of electronic producers love presets and I hate the Ableton default presets, they’re so cheesy.”

The interest in the two Klein EPs has taken her by surprise. “It’s been really weird seeing people get into it. Even if someone’s into a certain song, I’m always like, why? I’m intrigued,” she says. “I didn’t hear anyone doing what I was doing, just ‘cos my reference points were so ridiculous.”

Last year she discovered that copies of Only were selling for up to £100 on Discogs. “I didn’t even know what Discogs was,” she laughs. “I went on the website and I was screaming – I’m not even getting all of this!” Only 100 copies were pressed the first time, she admits – they sold in half an hour. “My friends didn’t even get a copy, it’s all these electronic guys who buy in bulk. Some guy messaged me and said [adopting a posh voice] ‘Oh, I haven’t listened to it, but I saw it on a best of year thing’. I was like… thank you?”

Having successfully gatecrashed the experimental electronic scene, Klein now dreams of sloughing off the noise and distortion to deliver a pop record, placing her vocals at the fore.

“People are just clocking the last record now and I’m so over it – it’s so noisy! I can’t even hack it anymore. I kind of want to get back into singing and just being like an Adele,” she laughs, “just wearing a dress with one guy on a piano. I’ve got this song called ‘Lover’ and I’m thinking of getting my friends to do a Hot 97 remix that I’ll send to all the hip-hop stations in America. Get Lil Yachty on a feature.”

She’s not shy to admit it’s about the long game (“Oscars, Grammys”), whatever that may involve. “I don’t think about things that happen around me or trends in London, ‘cos if I did think about that I would have just quit ages ago. I’m definitely not doing grime, or like OVO trap girl music, which would be so easy to do. But it’s something I’ve made, I like it, and I think” – she cracks up laughing – “Pavarotti would like it and Andrew Lloyd Webber would like it, and everything else is just a bonus.”