Demdike Stare have been creating their unique brand of electronic music since 2009, shifting from gloomy drone to noisy club sounds with surprising ease. John Twells has been following the duo since day one. Literally.

At the end of last year, shadowy northern electronic duo Demdike Stare released Wonderland, their first album since 2012’s acclaimed Elemental. Appearing without warning on December 2, its sleeve pointed to a departure from the grim imagery that had characterized the duo’s early canon. Each of the previous Demdike Stare albums was emblazoned with Andy Votel’s unmistakable occult artwork, but on Wonderland, Miles Whittaker and Sean Canty pulled back the curtain, revealing themselves in black and white on the front and back covers. The music inside takes its cue from the cover, as Whittaker and Canty ditch the darkness for an exploration of identity, influence and innovation.

When I first heard Demdike Stare it was early 2007. I was working at Boomkat in Manchester and Whittaker had stopped by the office to pick up some tunes. He handed me a CD-R containing the tracks ‘Living Dead in Burnley’ and ‘NEVERSHEEP’ and, according to Whittaker, my response was dismissive: “Needs more work”. I hardly remember, but it sounds about right. By that time I’d known Whittaker for years and this material was a particular U-turn – it was wildly different from the pristine electro of Pendle Coven, his duo with Gaz Howell, aka GH.

This wasn’t the Demdike we’d eventually hear, but the groundwork had certainly been laid. Those two tracks were eerie, hauntological experiments – the first sounded influenced by John Carpenter and Ennio Morricone’s ominous, thudding soundtrack to The Thing, while the second was more like Delia Derbyshire – fuzzy, psychedelic and alien. Part of this was undoubtedly thanks to Canty’s involvement. Like Whittaker, Canty grew up in Burnley, Lancashire, but while Whittaker developed an early passion for hardcore, jungle and techno, Canty had spent his youth obsessively digging for hip-hop, becoming fascinated by early electronics, exotica, film soundtracks and library records. It’s the fusion of these tastes that has forged the duo’s sound – a musical back-and-forth between two lifelong collectors and DJs. 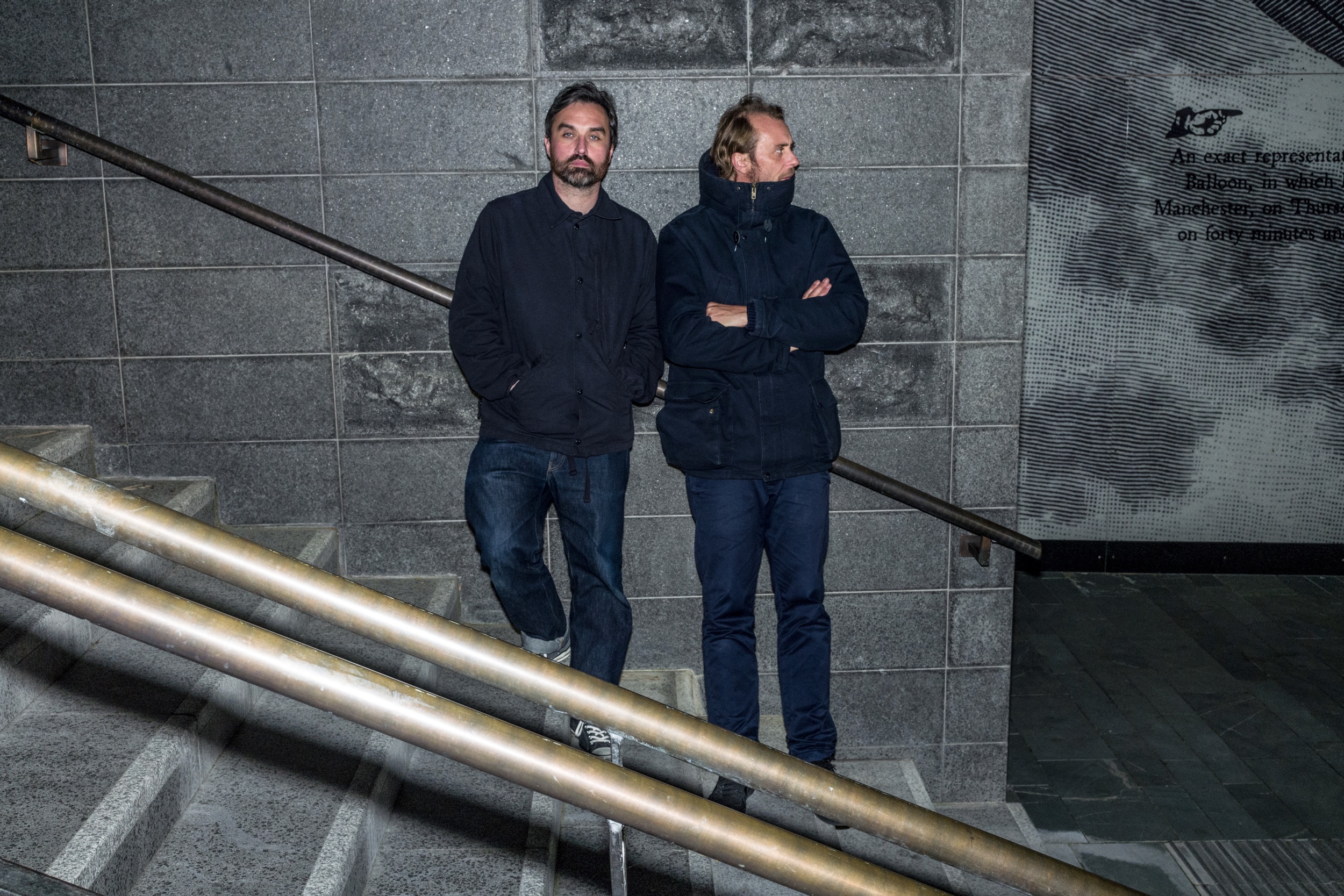 Wonderland is Demdike Stare’s most personal record to date, and harks back to their shared memories of youthful collecting and naive excitement – though without resorting to overused nostalgic tropes. When I chat to them, the topic of conversation heads in this direction quickly.

“We couldn’t repeat what’s already been done. Either by us or in the last 25 years,” Whittaker says brusquely. “‘Cause electronic music as we know it is pretty horrible. A lot of techno sounds old and boring to me.” This isn’t an indictment of younger producers – far from it. Whittaker is acutely aware that electronic music has thrived on a kitchen-sink-like attitude to innovation.

“That’s where new forms of music come from,” he says. “That’s what jungle was. Kids not knowing what they’re doing. Not being able to sync it up right, not having the context. Speeding vocals up until they were chipmunks. A lot of people at the time were like, ‘This is the shittest thing ever,’ but it turns out it’s a long-lived form of music.” But this isn’t a route he or Canty were interested in retracing yet again.

In 2013, Demdike Stare foreshadowed Wonderland with a series of white label 12”s boasting the utilitarian title “Testpressing”. There were seven in total, packaged in a generic sleeve from high-end German pressing plant Pallas; each 12” explored an influence the pair brought to the table, from UK garage and grime to no wave and drone metal.

“It was recalibrating,” Canty states, before Whittaker cuts in. “The Testpressings really helped us move away from that classic Demdike horror sound. Even though we still get pigeonholed for that, years later. The Testpressings are nowhere near it.”

They were certainly a surprise at the time, especially for listeners unfamiliar with Whittaker’s pre-Demdike output. Testpressing #001 was an unruly collision (ahem) of searing noise and ragged breaks that still sounds urgent four years later. It felt at the time as if Whittaker and Canty were finally reaching the point where their music was representing their skill not just as producers, but as veteran collectors and DJs with a laundry list of ideas to work through.

Whittaker recounts a chat from around that time with Shlom Sviri, who runs the Modern Love imprint and Boomkat. “He’s like, ‘Don’t even think about writing another record. Just write tracks and put stuff out almost randomly. Be free and do whatever you want but try to take it to extremes every time.’”

It ended up being the ideal way for Demdike to wrench themselves out of a creative rut, but made the prospect of writing Wonderland even more difficult. “We covered so much ground with the Testpressings,” says Canty. “When it was time to write a new record, we couldn’t do Tryptych or Elemental or Symbiosis and we couldn’t do Testpressings, so that was the hard bit.”

“You make techno, dude, get a grip – anyone can do that now, anybody can pick up this program and do it”

The groundwork had been done, but it was a prolonged process all the same. “Before, we literally just wrote tracks and they’d come out, it had never been work,” Whittaker says. “This time we just wanted to shake it up and it had to be something different. It had to be.” The duo were also starting to see cracks in their working process. “We were living in two different countries for a long time,” recalls Canty. “It just wasn’t happening. It came to a point where we just had to be in the same room.”

They explored so many different avenues that they ended up with a massive surplus of material, some of which ended up on the recently released Circulation mixtape. This tape shows the duo’s thought process in a little more detail, blending unfinished sketches with interludes, intros and endings pinched from some of their favorite tracks. It’s an enlightening listen that bridges the gap between the Testpressing series and Wonderland.

Two things happened that helped crystallize Wonderland – Whittaker took the plunge and moved back to Manchester and the two producers came across Jamaican dancehall duo Equiknoxx for the first time. “Not only do we have to be together in the same room and actually jam with boxes,” Canty says, “but we still have this need for other people’s music to be inspired from. It took us a long time to get to that.”

Canty and Whittaker ended up releasing Equiknoxx on their own DDS imprint, and the process of piecing together acclaimed anthology album Bird Sound Power ran parallel to the creation of Wonderland – it’s hardly surprising that they were influenced by it. “It’s just fun and exciting and we were getting bored with the seriousness of electronic music,” says Whittaker. “You make techno, dude, get a grip – anyone can do that now, anybody can pick up this program and do it. Then you get these Jamaican kids going through Italian library records and making this angular dancehall stuff.”

Living in the same city and with a renewed creative energy, when Demdike actually knuckled down to write the album, it came together remarkably quickly. “In the end, it was done really fast,” Whittaker admits. “And you can tell. It’s just a bit rough and I think we really like that.” They bought some new hardware – a Sequential Circuits Pro-One synthesizer, an original Roland TR-808 drum machine, an Eventide Harmonizer and an Overstayer compressor – and the component pieces of Wonderland fell into place.

Part of the speed was down to their recording process, where they took cues from their live shows, jamming with two Elektron Octatrack sequencers instead of painstakingly painting notes into a grid in Ableton. “The sad thing about computers is, unless you’re recording live into them there’s no life,” Whittaker says. “You’ve got to try and engineer the life into the sounds and that’s a nightmare. You can be at it forever trying to make something sound ‘real’. The easiest way is to just fucking record.”

And the title? That’s the most personal part of the record. “The big club in Burnley back in the day was called Angels,” recalls Whittaker excitedly. “And across the road from Angels was where we misspent our youth – an old arcade with one-armed bandits and video games called Wonderland. It was a place where you either went in and spent your pocket money, you went in and got mugged or you went in and got weed. It was like that.”

“It was there for years,” Canty chips in. “We’d be reminiscing loads about Burnley when we were having a brew break from writing tracks and we were just talking about Wonderland. It’s just a mental word.”

“It’s also the furthest possible thing from the occult or anything dark,” Whittaker adds. Canty pauses for a minute. “Between us, we know it’s pretty dark in there, but it’s quite a euphoric word, innit?”

Demdike Stare are performing at London’s Jazz Cafe on Wednesday May 31.

Read next: The Essential… Modern Love