FACT Rated is our new series digging into the sounds and stories of the most vital breaking artists. Next we meet Visible Cloaks, the Portland duo shattering the idea of “fourth world music” with music that balances the digital chaos of Oneohtrix Point Never with the graceful precision of Ryuichi Sakamoto. Scott Wilson finds out about their new release, Reassemblage.

Visible Cloaks’ music seems tailor-made for 2017’s broad electronic landscape. Its digital sheen hints at the future, but the Portland duo approach it with the mentality of a restless crate digger, mining dusty old records from across the world and music from throughout history for inspiration. Though they straddle vaporwave, the new age revival and the current wave of neo-classical and ambient music, they occupy a space of their own, composing music that could soundtrack a virtual reality zen garden. Spanning eastern and western musical influences, their sound seems to offer a utopian perspective that challenges today’s divisive political landscape.

Released last week on Brooklyn label RVNG Intl, Reassemblage is Visible Cloaks’ second album, but it feels more like a debut. The duo, formed of Spencer Doran and Ryan Carlile, was originally just Cloaks, Doran’s solo project. During the 2000s Doran made instrumental hip-hop and had modest success in Japan, where he got a multi-album deal with a label called Easelmusic. “It’s something I don’t talk about that much because it’s so different from the music that I make now,” he explains. “I try to not make it a big deal because it colors people’s perceptions. It’s a sound I’ve shifted away from.”

The roots for the current sound of Visible Cloaks can be traced back to 2010, when Doran made a mix for the blog of Jefre Cantu-Ledesma and Maxwell August Croy’s influential Root Strata label. Titled Fairlights, Mallets & Bamboo, the mix featured the music of Yellow Magic Orchestra’s Ryuichi Sakamoto and Haruomi Hosono, as well as artists that overlapped with their work in some way, such as composer Yasuaki Shimizu and his band Mariah. It expounded Doran’s idea of “fourth world Japan,” inspired by composer Jon Hassell’s “fourth world” concept of a possible future of music in which elements from different cultures around the globe have become melded.

“The way that [Hassell’s] idea played out was something more homogenised and more bland, for example Whole Foods’ ‘Putumayo World Music’ section, cheesy things where if you take a very shallow reading of lots of different cultures and overlap them you don’t end up with a lot of depth,” Doran says. “What we’re trying to do is take different software instruments from different cultures and stack them to create this sound world that’s more disorientating, which doesn’t have a clear source. It draws from so many other places that the inspiration is more abstracted and layered into a patchwork of different things that end up sounding like something else.” 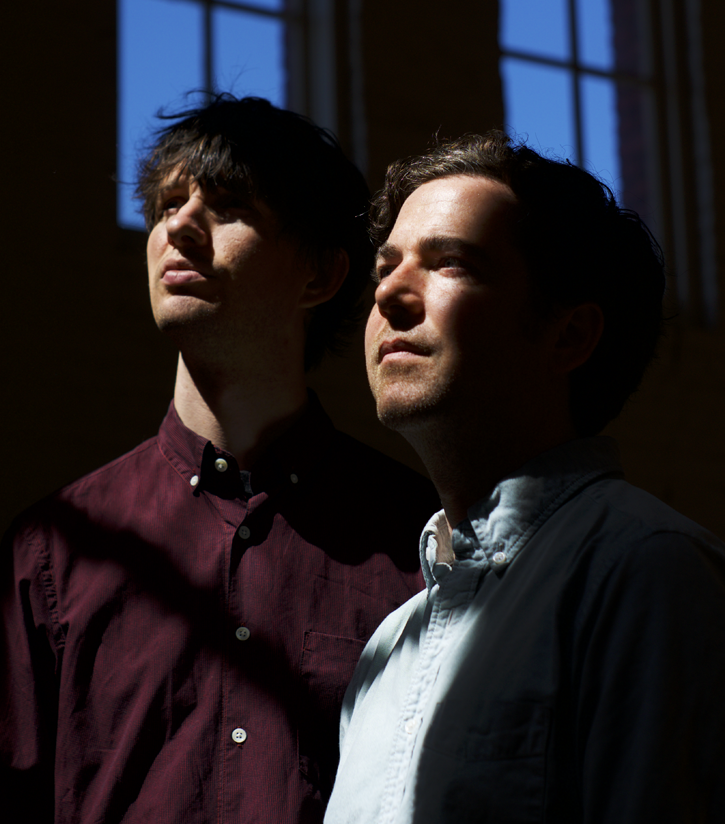 Doran and Carlile’s use of virtual instruments from different countries, such as the Armenian woodwind flute known as the duduk, is just one of many elements that goes into creating their unique sound, which can best be described as a combination the naive East-via-West melodies of Yellow Magic Orchestra and the unsettling, quasi-virtual spaces of Oneohtrix Point Never’s R Plus Seven. A key influence is Seigen Ono, a Japanese studio engineer whose “clear, crystalline, very present” way of mixing records can be clearly heard on tracks like ‘Wintergreen’ and ‘Mimesis’: “It was the very tail end of the analog recording era, right before things went to digital or on the cusp of things becoming digital, when it was the best of both worlds,” Doran says.

Working primarily in software, the duo’s own studio techniques are very different. To create their virtual spaces they use a software effect called an “Altiverb”, which is used to recreate the feeling of real world spaces through reverb. These can be stacked together to create an even more unusual effect. “It has this psychedelic effect,” Doran says, “moving within these different virtual rooms. When you combine that with using these hyper-realistic software instruments it creates a confusing feeling, in that it’s something that’s very real, but you can expose the artifice the space has by playing with these impossible elements.”

Their use of effects to create an uncanny sound extends to more complicated software techniques. On ‘Valve’, they run the voice of Miyako Koda, vocalist with Japanese pop duo Dip In The Pool, through a plug-in that transcribe her spoken-word vocals into a MIDI melody. The result is what sounds like uncanny ambient vocoder music. On album closer ‘Place’ they use software that randomly generates a new set of notes every time the track is recorded to disk. Doran cites John Cage’s use of the I Ching and German composer Walter Zimmermann’s use of prime numbers to generate his music as influences on their own use of chance operations, explaining that it’s a useful way to “take [his] own ego out of the process” and put himself in the position of the audience.

The album’s title, Reassemblage, is taken from a 1982 film by Vietnamese artist Trin T Minha-ha in which she attempted not to “speak about” but “speak nearby” footage of women working in Senegal. “I think a lot of the point of her film, which is a very feminist take on this footage that she’s shot, is that we can’t really just ascribe our own external meaning on images of other people, because meaning is easily lost when you’re from another culture looking into someone else’s vantage point,” Doran says. Just as Minha-ha’s film tries to be sensitive of the cultures it takes inspiration from, Doran and Carlile’s music aims to remember the human influence behind their virtual spaces and chance operations, presenting it not as something to be fetishized but as a utopian “projected future.”

Reassemblage was written in a more optimistic time, before Donald Trump’s election took the world down a more uncertain path, but its themes feel appropriate for the current political climate – even if its idealistic vision of a future of shared artistic knowledge seems painfully far awy. “Multiculturalism and the ideas that come from immigration and cultures mixing in one space are something that’s in danger of being lost,” Doran says. “It’s something that you’ve got to push back against. Any tool you can use to do that is an important one. Whether or not our music is a useful tool in battling fascism, I can’t make that call, but in this post-Brexit, post-Trump world, I think it’s something that’s important to talk about.”

Reassemblage is out now on RVNG Intl