Unearthing the story behind Hyperdub’s celebration of video game music, Diggin’ in the Carts

At the end of last year, the esteemed Hyperdub label released Diggin’ in the Carts, a 36-track compilation of pioneering Japanese video game music. Lewis Gordon speaks to Kode9, Nick Dwyer and Hally who put together the compilation, and a selection of the artists responsible for the music itself to explore just how prescient the era actually was.

For a generation of artists, playing the eight and 16-bit video games of the 1980s and early ‘90s would have been the first time they heard electronic music. Enmeshed in the metal pins and plastic of the game cartridges are mini symphonies and weaponized club music. They accompany some of the most ambitious storytelling ever attempted while simultaneously soundtracking lean, mechanical shooting galleries. For Nick Dwyer, uncovering the music and composers of this period has been his life for the last few years. First a Red Bull video series, then a Red Bull radio show — last year it was broadened into a Hyperdub compilation shedding light on the more obscure and subversive offerings from chip-era Japan. But there’s also broader aim, Dwyer tells me excitedly from Japan. “What we’re trying to do is show that these guys were incredible electronic music composers, not just video game composers. We’re trying to say that this is a pioneering era for Japanese electronic music.” 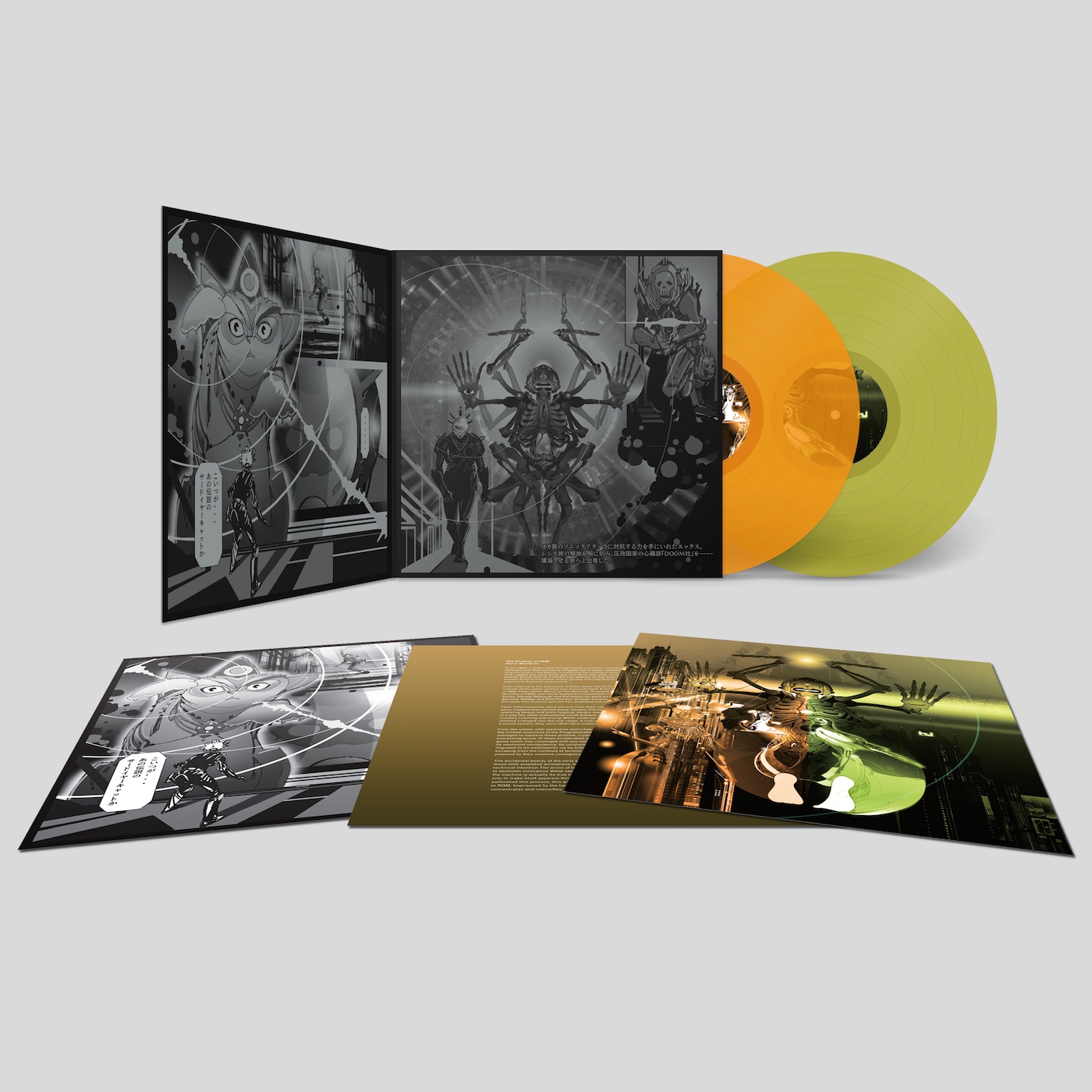 Assisted by label head Kode9 and Hally, the world’s leading video game music historian, it’s been both a rigorous and arduous process. Dwyer sifted through every soundtrack from the era and navigated the murky, complicated world of corporate licensing rights. Sometimes even the physical act of procuring individual tracks was difficult. There were points where Hally would have to record directly from the chip, modifying the output from analogue to digital.

Housed within the compilation is a distilled snapshot of not only the sounds of the era but also the technologies that powered them. It begins with the grainy synths of ‘Mazed Music’, lifted from the 1985 Konami space shooter, Gradius, carrying the listener up to 1995 with the Kazuo Hanzawa penned ‘Oblivious Past’, taken from Alien Soldier. What might appear as a simple jump from the eight to 16-bit era masks an array of interim technological innovations as composers often worked as sound engineers to squeeze every last byte from cartridge and console.

Prior to the birth of 8-bit home consoles, would-be players congregated in arcades to play video games. Space Invaders was a smash hit in 1978, combining an austere four note looping soundtrack with sound effects that doubled as eerie musical tones. The same year, Yellow Magic Orchestra released their self-titled debut album, from which two tracks twisted the chip music of Space Invaders, Circus and Gunpoint into an experimental realm with added compositional complexity. Then, in 1984, YMO’s Haruomi Hosono released Video Game Music on Yen Records. Editing original compositions from games such as Pac Man, New Rally-X and Xevious, Hosono gave them a life outside of the arcade machine. “That’s the first time anyone had used the term video game music,” Dwyer tells me. “And it’s the first ever chiptune album.” With that record, Hosono began what would be a long cross-pollination of ideas between video game and non-video game composers of electronic music.

Composers during the chip era were keen to exploit the limitations of the chips. Nintendo’s Famicom console, released in 1983, only allowed for square and triangle waves, albeit with two additional channels for noise and very limited samples. It was the development of wave memory synthesis that allowed for a greater tonal register. Namco, one of Japan’s leading game studios, pioneered the technique that allowed them to get much closer to the sound of real instruments. “Wave memory synthesis meant the composers could draw their own waves,” says Dwyer. “All of a sudden it opened up this new sound palette.” Hally tells me that “the people from Namco analysed all of the instruments with the Oscilloscope and studied the waveforms.” Sound engineers and composers might record real-life violins, painstakingly recreating its waveform within the chip.

The resulting sound verges on the uncanny — a computer music possessing only a fleeting resemblance to the reality it is attempting to mimic. Norio Nakagata, working at Namco while he composed surreal Japanese horror fantasy, Genpei Tōma Den, used wave memory synthesis during the period. “It [wave memory synthesis] allowed us to output orchestra-esque sounds as BGM [background music] for games,” he explains over email. “And it also expanded the width of musical expression.” Working at Namco also brought with it a huge amount of creative freedom. “The attitude was to thoroughly pursue whatever we found interesting. I proposed everything that I wanted to do at the time. If something wasn’t approved, my colleagues and I would arbitrarily keep working on them anyway.”

NEC, one of Japan’s leading consumer electronics companies, produced the PC Engine home console, marketed as the first of the 16-bit era. That system deployed the same wave memory synthesis technology that Namco used a few years earlier. Hiroki Nakayama, the composer behind turn-based strategy game, Hisou Kihei X-Serd, recalls being sent a prototype of the console. “It was trial and error to see whether or not we could use instrument samples, but the wave memory capacity was extremely small. We used many waveforms that we created by calculating waveforms of FM synthesis for one period and hand-drawn waveforms. Then we built the envelope generator (both pitch and amplitude) into the driver software. I feel that we depended on that to represent ‘instrument sounds’.”

Nintendo’s Super Famicom afforded yet more possibilities for composers. Rudimentary sampling had been a feature of arcade machines in the years prior to its 1990 release, but the Nintendo home console provided eight channels of pulse code modulation, the technology that enabled such sampling. Yuzo Koshiro, best known for his rave-inflected Streets of Rage 2 soundtrack, took advantage of pulse code modulation on the Super Famicom with his soundtrack for ActRaiser. “It was the only chip that could play ‘real sounds’”, says Koshiro. “The sound CPU was 8-bit so 64 kilobytes was the limit and thus it made it a distinctive sound.” ActRaiser was a bizarre slice of platforming and city-building simulation set in a quasi-mythological world. Koshiro’s accompanying score was suitably deranged, channeling the works of Bach alongside Japanese anime hit of the time, Space Battleship Yamato.

Similarly symphonic is Soshi Hosoi’s soundtrack for The Mahjong Touhaiden. Riffing on the minimalism of Steve Reich, Hosoi found a style that exploited the relatively small memory of the chip and chimed with the action itself. “I stuck to one arpeggio pattern to create music that would make an instant impression,” he explains. “The trance feel of minimal music and the exhilaration during gameplay are similar and have a high affinity.” Like Koshiro with his work on ActRaiser, Hosoi was also able to take advantage of the Super Famicom’s eight channel pulse code modulation, although many of the sounds he used weren’t originally produced. “There wasn’t much focus on sound quality and most instruments were samples from Roland SC-88. The only good sound I couldn’t find was the attack sounds of a violin so the sampling is from a cheap guitar I bought and played.”

Shifts in technology brought about shifts in sound, often tied to the chip in a console or arcade. “Every system, every arcade system board, every chip, they had different personalities,” Dwyer enthuses. Hally describes the Famicom as having a “Piko-Piko” personality, “bleeps and bloops” in English or a “naked electric sound”. He tells me the FM Sega Megadrive “sounds plastic and metallic at the same time” while the Super Famicom is “milder and more realistic”, a result of its capacity for sampling.

“Gaming culture is simultaneously entertainment and a bootcamp” Kode9

It wasn’t just technology pushing forward developments in sound. The unprecedented growth of Japan’s economy in the 1980s bankrolled the advancements, but the explosion of megacorporations revealed acute anxieties that played out on screen. Games like Metal Stoker and Torrid City transposed Tokyo’s newly built superarchitettura into the realm of fantasy and horror. Likewise, Yasuhisa Watanabe’s soundtrack to 1991’s Metal Black, a space shooter set in the year 2042, is peppered with gloomy ambient sections and lightning quick drum workouts. Dwyer notes the similarities between the work of the Japanese video game composers and the sounds developing concurrently in Detroit. “What a lot of these guys were doing, be it Derrick May or Juan Atkins or Underground Resistance, they were using synthesizers to soundtrack an dystopian or a utopian future, and the shooting games were very much set in dystopian futures.”

The speculative discontent these games depicted often resulted in sweaty, stress-inducing play. Kode9 points to them as forming part of our broader immersion in cybernetic culture. “The influence of science fiction cinema and fiction, as modulated through video gaming scenarios, specifically the depiction of hi-tech neo-medievalism is only becoming more prescient. The scenarios don’t just represent this mode of predatory capitalism, they are part of its delivery system, transforming the nervous system by quickening hand-eye coordination and reflex responses. Gaming culture is simultaneously entertainment and a bootcamp.”

Dwyer highlights two later examples that channelled Detroit techno in their vision of the future: 1996’s Battle Garegga and Ray Storm. He describes the latter, composed by Tamayo Kawamoto as “straight Detroit, that kind of hi-tech soul”. The relationship went both ways, though. Just as Haruomi Hosono edited the Namco classics in 1984 on Video Game Music, electronic producers have consistently paid homage to video games. Dillinja turned in a jungle remix of Tekken’s ‘Windermere Roll’, Traxman flipped the classic Pacman theme, while grime has a fruitful association with the medium. Contemporary electronic producers such as Ikonika and Jlin also pepper their productions with references and samples. Kode9 isn’t surprised by the crossover, drawing a similarity between the process of creating electronic music and the actuality of playing games. “I think for a lot of musicians, making music with computers is still implicitly a subset of that earlier human-machine sound-generating relationship.”

With the advent of the 32-bit era ushered in by the Sega Saturn and Sony PlayStation in the mid ’90s, video game music transitioned to CD quality, bringing the distinct sound of the chip era to an end. “They could just create music like normal musicians — the limitations were lifted,” Dwyer tells me mournfully. “Then it just became orchestral music or it just became jazz music. But the chip era is neat because nothing else sounds like that PC Engine chip, nothing else sounds like the Famicom chip, and that’s why it’s held up as something special.” For Kode9, the music of the chip era creates its own specific neurological reaction within him. “I get a real citric acid response to those tones,” he tells me. “It’s like licking a battery. Beautifully toxic.”

Read next: Yuzo Koshiro and Motohiro Kawashima’s Streets of Rage 3 OST is a valuable slice of techno history