All proceeds from the song will go to the Stephen Lawrence Charitable Trust.

Boy Better Know mainstay Frisco has shared a powerful visual for his new track ‘Black Man’, which is taken from his forthcoming album, The Familiar Stranger.

“I wouldn’t feel right releasing any other song than this one given the current state of the world”, Frisco says of the track. The monochrome video cuts between the MC rapping straight to camera and footage taken at Black Lives Matter protests.

‘Black Man’ is available to stream and download now. All proceeds from the song will go to the Stephen Lawrence Charitable Trust, which you can donate to directly here.

Watch next: FACT Archive – Pull Up – Grime Through The Eyes of Butterz 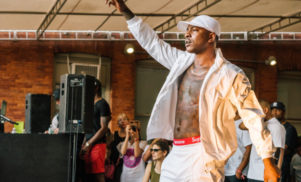