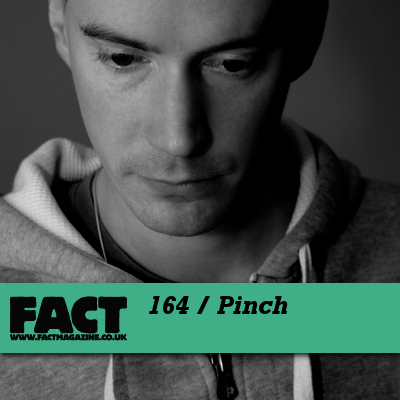 We’re delighted to this week bring you an exclusive FACT mix from Bristol dubstep trailblazer Pinch.

Pinch, real name Rob Ellis, has been a significant presence in our musical lives since his brutalist debut 12″ ‘War Dub’, released via his own aptly named Tectonic label back in ’05. Ellis’s more reflective 2006 Planet Mu single ‘Qawwali’ – among the best and most distinctive dubstep records ever made – paved the way for Underwater Dancehall, his debut album of 2007. Featuring a number of wisely chosen guest vocalists, including Juakali and house diva Yolanda, Underwater Dancehall stands up as one of the most coherent, sophisticated and satisfying dancefloor-derived albums of the noughties, and, as far as dubstep LPs go, it’s perhaps second only to Burial’s brace in terms of vision, ambition and virtuoso execution.

In the three years that have elapsed since then, Pinch has continued to work his fingers to the bone as a DJ and producer, releasing singles not only through Tectonic but also Punch Drunk, Soul Jazz and most recently Dancing Demons. As a label-owner and A&R he’s shown incredible commitment and integrity, rigorously maintaining Tectonic’s dubstep core while being bold enough to signmore leftfield offerings such as Pursuit Groove’s recent Foxtrot Mannerisms EP. A roll-call of some of the producers who’ve released 12″s and LPs on Tectonic, or contributed productions to its Tectonic Plates compilations, says it all: 2562, Flying Lotus, Skream, Peverelist, Distance, Shed, Benga, RSD, Loefah…

Interestingly, Tectonic is but one arm of the musical empire over which Pinch presides. Formed in 2004, Multiverse is a creative studio and publishing company that acts as an umbrella to the Tectonic, Kapsize, Earwax, Caravan and Build labels, with a recording and production facility on Bristol’s Whiteladies Road. A new double-CD compilation, Dark Matter, celebrates five years of Multiverse, and ranges from the grotty industrial dubstep of Vex’d to the springy UKF-inflected house of Baobinga & ID, via the subtle techno variations of October and Emptyset and the super-saturated purple funk of Joker. More than just a collection of tasty tracks, Dark Matter enshrines a hugely important spasm of creativity in Bristol, one which has seen it shed its early noughties reputation as a d’n’b ghost-town to become, once again, the envy of the global underground. Dark Matter is out now; for more information and tracklist, click here, and buy your copy here.

To celebrate the release of Dark Matter, not to mention his new quarterly DJ residency at London’s Fabric, Pinch has put together a 100% vinyl and acetate mix for FACT that’s absolutely stuffed with as-yet-unreleased material. There are a bunch of new tracks from Skream (‘Amitystep’, ‘Phatty Druma’) and Mala (‘2 Much Chat’ ‘Answer Me’), Peverelist & Appleblim’s take on Bass Clef’s ‘Promises’, Pinch remixed by Pangaea and remixing WAX (aka Shed) as well as repping with three originals of his own (‘The Boxer’, ‘Elements’ and ‘Swish’). There’s further dubplate action from Jack Sparrow, Redlight, Distance and Goth Trad. If you want to know where dubstep is headed in 2010, get downloading.