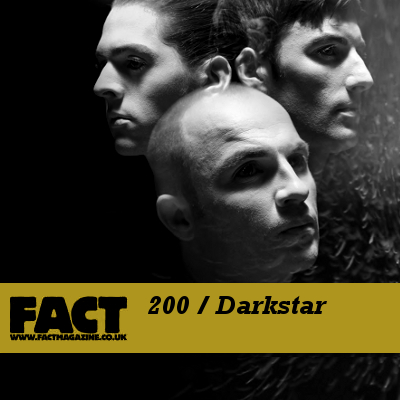 FACT’s mix series is 200 sessions old. To honour the occasion, we’ve got a mix from one of our favourite groups of recent times, Darkstar.

Darkstar started as the duo of James Young and Aiden Whalley, with a series of singles on their own 2010 label, as well as MG77 and Clandestine Cultivations. Within a year, they’d become a key part of Kode9’s Hyperdub roster, debuting for the label with the minor classic ‘Need You’/’Squeeze my Lime’. UK garage and synth-pop filtered through a chiptune lens with vocals sung by the world’s saddest robot, it expanded on the promise shown by early Darkstar cut ‘Out of Touch’, and showed glimpses of the mournful computer pop to come.

A year later, Darkstar released ‘Aidy’s Girl is a Computer’, fulfilling that promise and winning them fans beyond the FWD>> circuit they were primarily known in. A whole album of these frozen Mac laments looked set to follow (and would have, if album outtakes ‘Automating’ and the original version of ‘Gold’, found on this FACT mix, are anything to go by), but at some point between them and now, Darkstar scrapped that idea and became a three-piece, with comparatively clean vocals sung by new recruit James Buttery.

Last month, they released their debut album, North. You can read FACT’s review here; needless to say, we think it’s great. Darkstar’s FACT mix features the original version of North highlight ‘Gold’, as well as cuts from Games, Radiohead, Moodymann, New Order, Shed and more. In the words of the group’s James Young, ‘it’s a mixed selection, and I’ve tried to keep it in an arrangement that I myself would listen in personally. It’s typical of tunes I’d skip between before I record, and what we were listening to recording the album.”