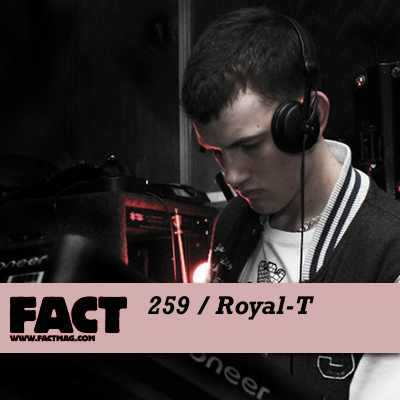 It’s no secret that in the last twelve months, instrumental grime has been in ruder health than it has been for a while.

Swindle, Darq E Freaker, Slackk, Logos and Spooky appear to have hit rich veins of form, while newcomers Deset, Doshy, Faze Miyake and Preditah are making some of the freshest music around. Hell, we’ve even had a return from two of the genre’s legends: Alias and J Sweet, who delivered one of the best FACT mixes of the year to celebrate the release of their new EP. And therein lies the difference: there’s simply more releases around than there has been for a long time, both on vinyl labels like Butterz and Oil Gang and self-released tracks on iTunes.

Few of these artists are as constantly rewarding as Royal-T, however. The Southampton resident made his debut on wax in 2009, with the 1Up or Shatap EP on No Hats No Hoods (featuring the still-remarkable ‘Beat Fighter’), but it’s since becoming part of the Butterz stable that he seems to have stepped into second gear, releasing the colossal ‘Orangeade’ and remixing TRC’s ‘OO AA EE’ to provide the instrumental for Blacks and P Money’s groupie anthem ‘Boo You’.

Royal-T’s FACT mix is packed with unreleased material, including more collaborations between himself, P Money and Blacks, remixes of Wiley and Katy B, and dubs from D.O.K, DQ Q and more.