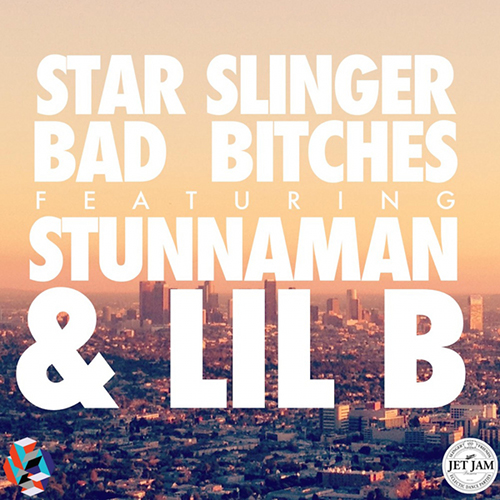 Hip-hop is obviously a huge influence on Manchester producer Star Slinger, but it’s unusual to hear folks actually laying verses over his productions.

Juicy J hopped on his ‘Dumbin’ track a while back, and now rap freakazoid Lil B (plus fellow Pack-man Stunnaman) has given a Star Slinger instrumental the vocal treatment. As with those Chris Brown x Hudson Mohawke cuts, ‘Bad Bitches’ is an interesting collision of worlds.

It’s certainly a rich cut, stuffed with juddering vocal samples and undercut by a thick bassline. The plenitude of Star Slinger’s sound doesn’t leave the MCs with much room for manoeuvre; their voices, rather than soaring over the top, just become another element in the mix. Stunnaman’s contribution is practically negligible, but Lil B sounds wonderfully serene amid all the hullabaloo. The result may be a bit cluttered for some, but ‘Bad Bitches’ had definitely got ‘summer banger’ scrawled all over it.

Lil B, surprise surprise, has also just dropped a new mixtape. Less than a month after the impressive God’s Father, the Cali MC has released #1 Bitch – you can grab it via DatPiff. ‘Bad Bitches’ is available to stream and download below.