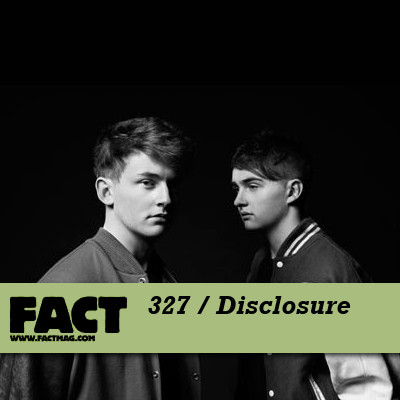 FACT mix comes from South London production duo Disclosure, one of the most exciting acts to emerge from the UK this year.

We first heard of Disclosure through Air France, when the sadly-discontinued Swedish pop group included ‘Blue You’, part of a free EP by Disclosure, in their FACT mix from last Summer. We’ve kept tabs on the duo – real names Guy and Howard Lawrence – since, and this year they’ve really started to come into their own. Their remix of Jessie Ware’s ‘Running’ took an excellent original and bettered it, while ‘Boiling’, the lead track from their next EP, already sounds timeless.

Crucially, what gets us about Disclosure is that at times we’ve felt like we shouldn’t like them: their aesthetic’s so wipe-clean and studiously engineered that usually we’d be craving a bit of grit after just a couple of minutes, but the duo’s music is so undeniable on a dancefloor, with chunky riffs that feel like classics from the first note in, that we’ve found it pretty much impossible to deny them. And here we are.

Disclosure’s FACT mix, recorded by Guy to promote their appearance at Spectrum’s upcoming London warehouse party (the date’s May 5, the line-up also includes Sub Focus, Breach and Chase & Status) is every bit as picture-perfect as the pair’s own productions, full of colour and led by melodies that could’ve been hits at any time in the last 20 years. As well as material from their new EP, there’s drops from some of dance music’s other most promising figures in Paleman, Jordan Peak, Thefft and Dusky, plus big hitters Kerri Chandler, Jai Paul and Eats Everything.