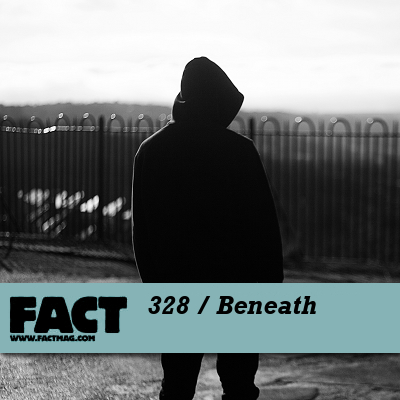 FACT mix 328 comes from Beneath, the hardest-hitting newcomer in the UK underground.

Whether it’s a reaction to things becoming a little too soft in the last eighteen months is another debate for another day, but there’s a refreshing ruggedness to the UK’s dancefloors right now. It’s found in LHF’s towerblock mysticism, the swaggering grime of Slackk, the bombscare house of Champion, Jook 10 and Eastwood and the “fuck everything, let’s dance” agenda of Mistamen and Swing Ting.

Perhaps more than anybody though, this shift seems to have been encapsulated by the success of Beneath. Raised in Stoke, but now based in Sheffield, Ben Walker makes razor-sharp, brittle club music that feeds off a desire to “make something [that you’d] immediately know was from the UK”, with UK Funky and dubsteppers / former dubsteppers Digital Myztikz, Kode9 and D1 as immediate reference points.

Beneath’s music might be house tempo, but more than anything it reminds us of the ruthless minimalism of early grime and dubstep: it’s lean, stripped-back music made for ciphers and the dancefloor, and there’s simply nothing harder out there right now. His addition to our mix series is Beneath through and through: all vinyl and dubplates, it’s floor-focused music for the darkest corners of the club. Most of the material is his own, but there’s room made for newcomers Batu and Hagan, UK house mainstays Grevious Angel and Smoove Kriminal, and more.