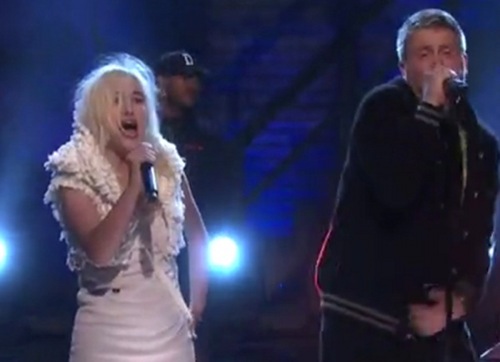 El-P’s well-received Cancer For Cure has given the New York rapper’s lengthy career a sizeable shot in the arm.

‘Works Every Time’ was one of the more eyebrow-elevating cuts on the record, featuring as it does an unlikely appearance from Interpol’s resident droner Paul Banks. El-P stopped by late night chat instutituion Conan to perform the cut, and brought along Romantic chanteuse Zola Jesus to fill in for Banks.

El-P strikes frontman poses and gives the track his all. Jesus, meanwhile, spends El-P’s verses doing her best Iggy Azealia impression in a white fur hood. Her foghorn wail, however, is well-judged and forcefully delivered. The arrangement also features some splendid intervention from Conan’s resident horn section. It’s a strong performance, albeit one undermined by some very effete bongo playing. Head to Consequence Of Sound to catch the clip.