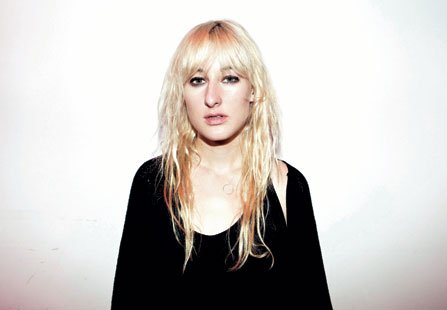 Just in case the song’s Madonna-meets-Cold Cave feel wasn’t obvious from the first note, the video features a backing cast of monk-type figures dancing in perfect time on some vaguely pentagram-y floor markings to ram the point home. It all seems a bit French and Saunders to us, if we’re honest – make your own mind up below.

Update: The video’s director, Jacqueline Castel, has talked about its conception in Dazed:

“For ‘Seekir’, Nika [Zola Jesus] and I were interested in exploring the framework of a pop music video. While practically and aesthetically the video needed to remain minimal, it felt important to flesh it out conceptually. Like any great pop song or video, the goal was to communicate complexity through simplicity – for us, that was done via deceivingly advanced dance choreography and by weaving a complex philosophical thread throughout the video, even if on the surface level we were conforming to a basic pop video formula.

“I’ve always loved how Nika embraces both the avant-garde and bubblegum pop with Zola Jesus, and wanted to find a way to explore these dualities in her music and merge the worlds of the experimental and the mainstream. An apocalyptically-tinged pop song, emotionally visceral yet danceable, seemed to present the perfect opportunity to explore dichotomies, which would be echoed in the all of the video’s creative departments for Nika’s look. From stylist Jenni Hensler’s pairing of custom geometrical shoulder pieces with softer, elemental forms to hair stylist’s Clark Phillips feral yet methodical braid work.”