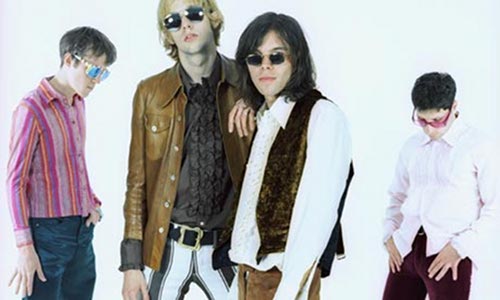 Long-sighted shoegazers Ride are about to undergo the reissue treatment.

Pitchfork report that the majority of the Oxford ensemble’s LPs – Going Blank Again, Carnival Of Light, Tarantula, OX4_The Best Of and Smile – will be repackaged and reissued by the band’s own Ride Music imprint on August 20. The releases will compliment last year’s 20th anniversary reissue of debut album Nowhere.

By way of fanfare, the band have now released an ancient Portishead remix of Carnival Of Light cut ‘Moonlight Medicine’. The original track, it ought to be noted, features organ contributions from Deep Purple’s Jon Lord, who sadly passed away on Monday.

For anyone that’s been keeping up with Portishead’s recent work/numerous offshoots, the remix provides the shock of the old. No Krautrock signifiers here: the ‘Moonlight Medicine’ is a lumbering, druggy piece of trip-hop, enlivened by some nifty turntablism and Adrian Utley’s louche guitar work. That organ is all-enveloping, shining brightly right at the front of the mix.  “Freedom and time/It’s got me frozen up inside”, goes the lyric, and you’ll find it difficult to hold off the nostalgia when enjoying this muted blast from the past.

Ride’s Steve Queralt has also offered his two pennies worth on the remix: “I remember at the time we wanted to approach a number of the big name DJs to remix the whole EP but were constrained by costs. Paul Oakenfold was extremely expensive. At the same time we had a promo of the first Portishead single which at the time sounded like no other music around, dark, atmospheric and heavy on the bass and drums. I certainly remember being very excited by it as was Loz so they made it onto our very short list of possibles. Thankfully, we pursued them and amazingly they agreed to do it.

“The result was almost an education in itself. This is how you remix a song. Get rid of the original performance, take a slice of the vocal track and put your own composition behind it. The only similarities to the original tune are the vocal loop and general tempo. Oh, and the Hammond which was played by Jon Lord anyway so, for us to take any credit would be stretching it a bit.

“Having said that, I’m still immensely proud to have the track as part of our catalogue. As a stand alone piece of music it is stunning, not only a cool Ride track but a really great Portishead one too.”