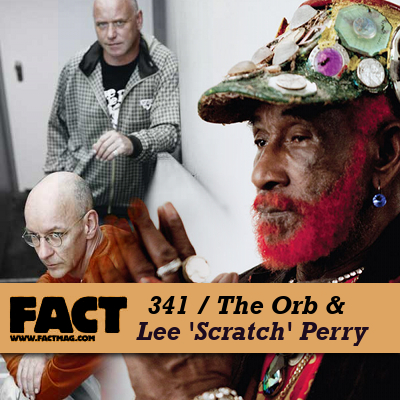 It’s really not every day you get a podcast like this.

The Orb, innovators of ambient house and one of Britain’s all-time most celebrated electronic acts, have teamed up with the inimitable Lee ‘Scratch’ Perry, one of Jamaica’s greatest ever musicians, for a new album, The Orbserver in the Star House. As The Orb’s Alex Paterson put it, in an interview earlier this year, “we wanted to do a souly type, modern, minimal album with some reggae influences with [Perry’s] vocals on top. I think its one of the best bits of work we’ve ever done.”

To toast the album’s forthcoming release, The Orb and Perry have also teamed up for a FACT mix. God knows how you’re supposed to start tracklisting, or even describing it; FACT mix 341 is like a slow-motion kayak ride through a pipe of slurry, thick, overwhelmingly delayed basslines obscuring wonky melodies – some recognisable (‘What A Wonderful World’, ‘Zombie’), others from another planet entirely. Plus, of course, you get Perry toasting on top, though around half-way through he gets bored and toddles off for a while. Would you want it any other way? We certainly wouldn’t.

The Orbserver in the Star House will be released this September; download FACT mix 341 below. And happy Jamaican Independence Day.