“Willing victims in a state of sensory deprivation”, sampled on Matmos’s latest 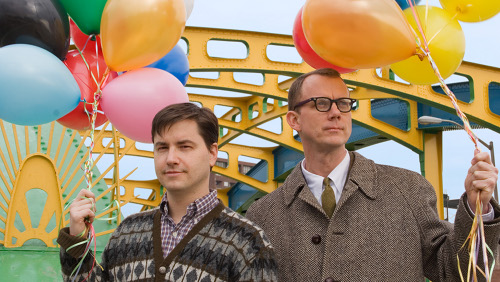 The Baltimore-based duo of Drew Daniel [left] and M.C. Schmidt [right] make music based on sampling everything from cracked eggs to spanked asses, and on new EP The Ganzfield, things get even odder. As The Guardian report, for this record Matmos “put a number of willing victims into a state of sensory deprivation by blindfolding them and blasting them with white noise. It was then left to Daniel to transmit “the concept of the new Matmos record” (The Marriage of Two Minds, due out through Thrill Jockey in 2013) directly into their minds”.

“From there the subjects were videotaped and asked to relay anything they saw or heard while Daniel was doing his transmitting, with any slight hums or murmurs forming the melodies of the new songs. If, for example, the subject described an action then the pair would have to act it out, recording the sound it made and using it in the songs.” No human beings were, apparently, hurt in the process.

And then you have it: some of the oddest dance-punk you’re ever likely to hear, and on of the most danceable theory pieces too. Stream ‘Very Large Green Triangles’, from Ganzfield, here, and read FACT’s recent My First Gig feature with the pair here.