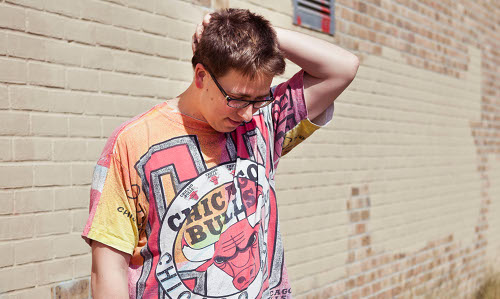 Update: The aforementioned Kickstarter campaign is now live and features a twisted meme-splosion of a commercial; watch it below.

Whatever Chrissy Murderbot does – and as last years’ Womens Studies showed, his range is not to be sniffed at – a mischievous smirk never seems to be far from his lips.

Perhaps we shouldn’t be surprised, then, that the alias for his new disco material is Chris E. Pants, and its debut release will centre around his pet dog, Bubbles.

These tracks are loose, lazy constructions, with live bass and crisp drums leading the way. ‘Doggy Style’ is an ode to Bubbles, straying into unexpectedly spacey territory with delayed horn lines and arpeggiating, Moroder-esque synths; ‘Pass It Around’, meanwhile – easily the funkier of the two – centres around a nice, romantic ghetto house sample.

Murderbot will be running a Kickstarter campaign to get the tracks pressed to 12”, which will enable you get hold of the record two weeks in advance of the general public – and for cheaper, too. There’ll also be a Bubbles-centric video for your delectation, so keep an eye out for information on how to help out as it emerges. You can stream the record in full below.