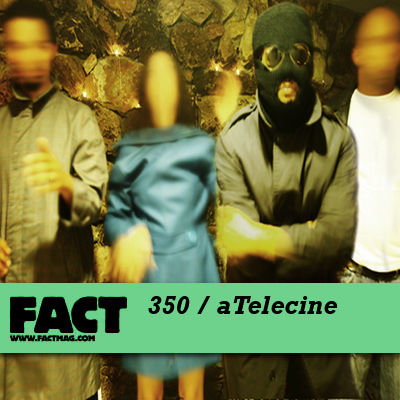 From the off, it was clear that she was no ordinary performer: her stage name was a nod to Sascha Konietzko of industrial perennials KFDM, and time and time again she showed herself to be extraordinarily eloquent and considered in her defence of the industry, entirely unwilling to inhabit the role of victim. As The New York Times once observed, her career was “distinguished both by the extremity of what she is willing to do and an unusual degree of intellectual seriousness about doing it.”

In 2008, Grey formed aTelecine, an industrial music collaboration with her friend Pablo St. Francis. No mere side-project, the group’s line-up has swelled to include additional members Anthony D’Juan and Ian Cinnamon, and has released no less than six albums in two years; the seventh, Entkoppllung, has just come out on Dais Records. It’s their second release on Dais (home also to records by Cold Cave, Robert Turman, Psychic TV, Genesis Breyer P-Orridge, Iceage and Prurient), following 2010’s creeping ambient debut ‘…And Six Dark Hours Passed’, and their most impressive full-length since the terrific A Cassette Tape Culture (2010), which like most of their records was issued by New York witch-house stronghold Pendu Sound (Chelsea Wolfe, White Ring, Mater Suspiria Vision).

Recorded live to tape in four days by Grey, St. Francis and Cinnamon, Entkopplung is the pulsating, paranoid electronic score to the English/German film of the same name, described by Dais as “a highly esoteric science fiction labyrinth in the shape of Phillip K. Dick meets William S. Burroughs”. It’s undoubtedly the most concise and coherent of aTelecine’s albums to date – for a taster, namely the track ‘Sisters Lower 3rd’, and to pre-order the record, visit the Dais site.

On Friday 19 October at the Unsound Festival in Krakow, aTelecine will make their live debut, as a trio comprising D’Juan, Cinnamon and Grey. Headlining a sold out show at the city’s Engineering Museum with Ben Frost and Raime, this world premiere is a considerable coup for Unsound, which has adopted ‘The End’ as its theme for 2012, and also boasts performances from the likes of Vatican Shadow, Theo Parrish, Lustmord & Biosphere, Demdike Stare, Mala, Julia Holter, The Haxan Cloak, Teengirl Fantasy and many, many more. Further information and tickets here.

To herald their live debut, Sasha, Ian and Anthony have put together a mix of influences and current listening for FACT. We’re talking stoner metal sludge from Goatsnake and Sabbath, dystopian hip-hop from Cannibal Ox, tortured chanson from Nico, torrid industrial (late 80s and 90s-style) from Skinny Puppy, Haujobb and Nitzer Ebb, oh and a slice of Queen’s score for Flash Gordon. Download and stream below.