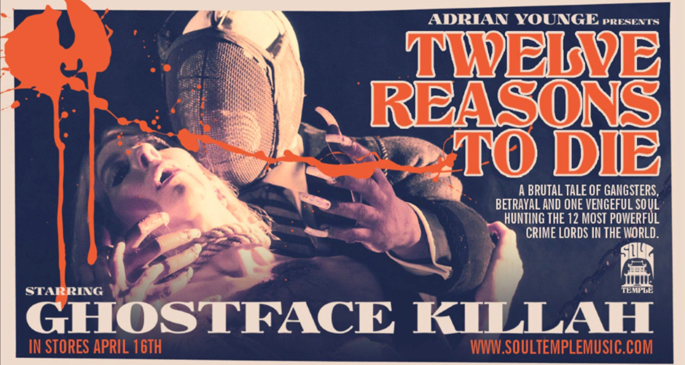 With only a week left until Twelve Reasons To Die finally hits the shelves, NPR have kindly stepped up to host the full album.

The teasers we’ve been hearing over the last month or so have given us plenty of food for thought, and we can now safely say that Twelve Reasons To Die is deserving of all the hype it’s had around its release. Ghostface has never really dropped the ball in terms of quality (Apollo Kids remains an underrated gem), so while the record could hardly be claimed as a ‘return to form’, what it manages to do is revisit a style that most people associate with the Wu Tang Clan in general. This is almost entirely due to the slick, knowledgable hand of producer Adrian Younge, and rather than lazily pastiche the past, Younge captures the essence of 36 Chambers-era Wu and spikes it with a smart pinch of Blaxploitation-influenced badassery.

Black Dynamite-producer Younge digs from the checkered history of soul, funk and jazz just like RZA-obsessed Django Unchained director Quentin Tarantino does with his cinematic obsessions, and in Younge’s expert hands we’ve got a record that Wu Tang devotees have been demanding for far too long.

You can stream the record here.