Since expanding their regular parties into a record label, the promoters at Berlin’s Leisure System have released material from Pixelord, Eprom, Barker and, perhaps most notably, JETS, the duo of Machinedrum and Jimmy Edgar.

The label will be taking its release schedule to the next level this year with records by grime up-and-comer Visionist, ice-cold electro unit Dopplereffekt, Tim Exile and more.

A lot of the forthcoming Leisure System releases – as well as tracks by Kowton, Jimmy Edgar and more – feature on this mix for FACT, by Leisure System’s Puzzle, and to accompany it, we spoke to the company’s N>E>D> about their plans for the year ahead. The interview follows, while the mix and tracklist, plus a list of the confirmed Leisure System parties for 2013, can be found at the bottom of this page.

Tell us about the year you have ahead, in terms of releases. It sounds like things are really heating up.

Yes, we’ve been holding back till we’re ready with a run of releases and its all ready to pop. We have a series of mini EPs coming from Visionist, Tim Exile, Kommune1, Hubie Davison and a banging EP from the mighty Dopplereffekt – their first release in six years – plus a special hottie that we’re working on. We’re super excited about all this music, it’s really inspiring stuff.

Do you have any overall goal for the label, or is it more the case of releasing stuff you like and seeing where it takes you?

Leisure System is a collective so there are different forces pushing and pulling its direction and when we all agree we move forward. A few of us are involved in the LittleBig Agency, so there is a symbiosis between the two operations. Leisure System is the natural outcome of us being in the middle of this buzzing community of artists.

Obviously a Dopplereffekt release is a big deal – how did you coax that out of Gerald Donald? And what’s your relationship with him?

The relationship is great actually. Once we proved ourselves to be a trustworthy bunch it was pretty straight forward. I was involved with his live activities via LittleBig before we started discussing a release and further live shows, which is similar to how the JETS release came about. Some of the artists we’ve worked with for their whole musical careers so its kinda like a family vibe.

It sounds like you’re expanding the parties this year too, what do you have coming up?

Leisure System started as a residency at the Berghain almost five years ago, so we’re ramping things up towards celebrating our anniversary on August 16 in Berlin. We will announce that monster line up after our Day / Night ‘Off’ events in Barcelona on June 13 – we’re super excited to have such a quality bunch playing for us. We also have our stage at Exit Festival in Serbia on July 13 and at Dimensions Festival in Croatia on Sept 6 as well as a nice jiggy banger in Amsterdam on Sept 27 and a big blow-out lining up for Paris in November. We just had an epic Leisure System vs Ostgut in Moscow on May 8 and have alot more in the pipeline.. one step at a time.. next on the list are New York and Tokyo. 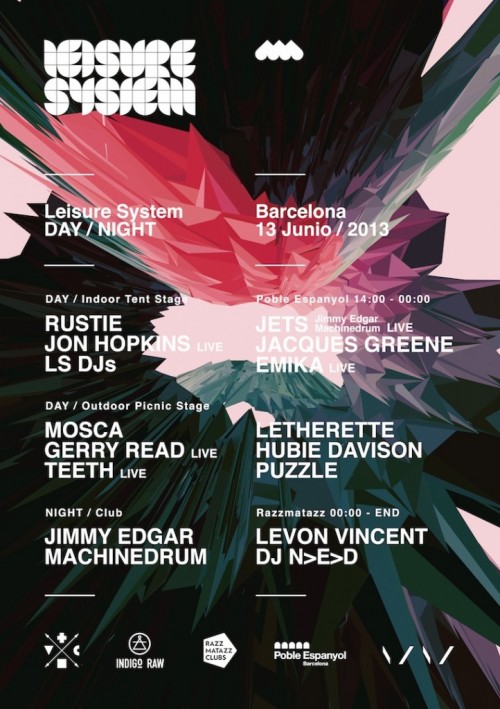