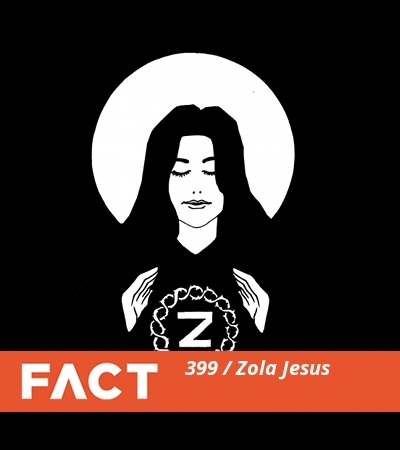 The irreplaceable Nika Danilova plunders her subconscious on one of 2013’s most idiosyncratic FACT mixes.

On her earliest releases as Zola Jesus (the Tsar Bomba and Stridulum EPs; debut album The Spoils), Danilova was a wraithlike figure – a half-heard presence, buried under industrial clutter and lashings of tape-hiss. She’s come along way since those furtive beginnings, blossoming into a very peculiar sort of star – the poster girl for a unique brand of stygian goth-pop, and a go-to for everyone from David Lynch to El-P.

Danilova’s work has always played pop nous off against experimental impulses. On the one hand, she’s built a reputation as a blog-friendly chanteuse, making accessible music that embraces melodrama without tipping into schmaltz. 2010 breakthrough Stridulum II dispensed with some of the grit and gore of those early releases, and 2011’s Conatus was an even slicker affair – a midnight raid on the middle ground, combining high drama with glossy production and beefy choruses.

For all her melodic smarts, though, Danilova’s never disengaged from the avant-garde. 2010 gave us an essential collaborative EP with LA Vampires – a set of doom-monger dub that ranks as her weirdest release to date. This year, meanwhile, saw Danilova release Versions, a set of twisted reimaginings of her back catalogue produced in association with Foetus mastermind and industrial pioneer J.G.Thirlwell. An adaptable shapeshifter, then – and, what with her orotund vocal style, an instantly recognisable one too.

It’s not a secret that Danilova’s got good ears – indeed, she’s previously proselytised for Autechre and and bigged up Koyaanisqatsi on these very pages. Not unsurprisingly, her maiden FACT mix is one of the most venturesome we’ve heard all year. No tracklist, but expect spirituals, scrambled IDM, thug rap and German Lieder, marshalled together under the authority of Danilova’s curious but effective dream logic.