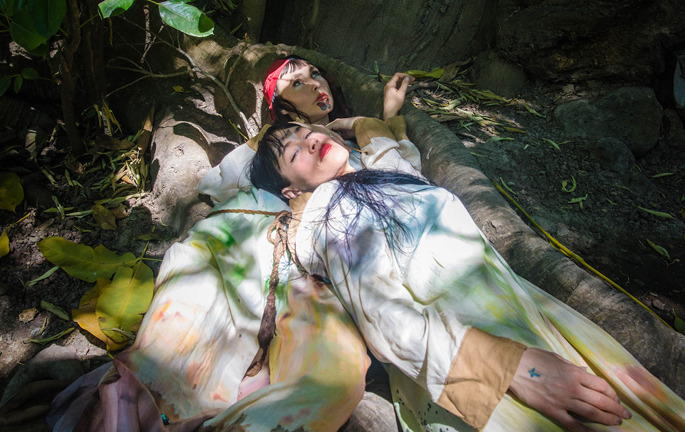 FACT TV have premiered ‘Gravediggress’, the latest video from CocoRosie‘s new album Tales of a GrassWidow.

The video was directed by the group’s Bianca Casady, who describes it thus:

Shot in Southern France, spanning several different seasons, The Gravediggress emerges from the imagination of the clown. Played and danced by Biño Sauitzvy, The Clown oscillates between young and old, innocent and deranged. Our mother plays the masked Gravediggress who’s stuffed hands struggle at menial tasks such as picking wheat and taking laundry from the line. The narrative is a loose journey thru the psyche of a lonely outcast who finds ecstasy and company in nature. The filming was spontaneous though it took much more time than a typical music video and without the pressure of a studio and crew we were able to wander and shoot in this way.

We let the work steep and revisited the project months later for another stage of development. My working relationship with Biño, a Brazilian choreographer based in Paris, who has also trained in circus and clowning, started in 2011 when we developed Nightshift, my first theatrical work. We also started then to discover in dance, the brokenness of the outcast. He played a homeless-drunk, clown called Hummingbird Man. I have worked on many videos over the last 14 years and have shot many of them in this same location but this is my most narrative attempt to date. I prefer to shoot intimately, just me and the other and the force of the elements. Some times our hands got frozen cold, or we got attacked by swarms of mosquitos, spiders crawled out of every hole and we truly marveled over the moon and pink sky.

You can catch CocoRosie at the following live dates: