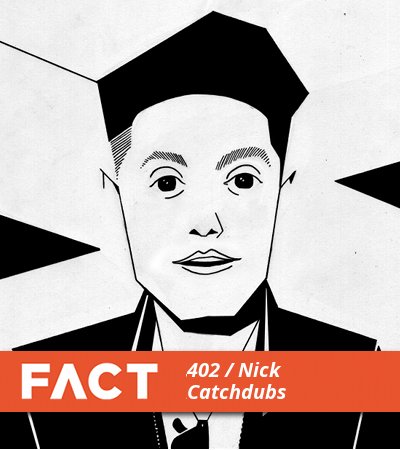 FACT mix 402 comes courtesy of Nick Catchdubs, co-founder of the Fool’s Gold label and one of the best party DJs around.

People sometimes say “party DJ” like it’s a slight – as if this whole dance music culture that so much of FACT is built around wasn’t to do with parties before it was anything, and as if plenty of the best music ever made, from, we don’t know, ‘Fix Up Look Sharp’ to ‘We Don’t Have to Take Our Clothes Off’, doesn’t sound better at a sweaty club with you and your friends than it does anywhere else – which is bullshit. Fool’s Gold have been throwing and soundtracking great parties since the mid-’00s, releasing early records by Kid Sister, Kingdom and Count & Sinden, as well as bigger projects such as Danny Brown’s XXX (not to mention his new album, Old) and El-P & Killer Mike’s Run the Jewels. At this point, they’re completely on top of things.

Catchdubs’ FACT mix is, in his own words, designed for bumping in your car, kicking off with material from his forthcoming Smoke Machine album before rolling out cuts from Kanye West, Earl, Dave Nada, Outkast and more. It’s strictly for your jeeps – download it below.

What was the inspiration behind the mix?

It’s a car mix for sure. I wanted to make something people could drive around to, that’s my preferred way to listen to music. I wasn’t tripping too much on throwing in unreleased or brand new tracks. These are just some favorite songs that kept popping up in my life the past few months (I can’t tell if my girl loves or hates how much I sing ‘Shopping’). A lot of these have been out for a minute and didn’t really get a ton of shine from other DJs or the internet illuminati… or quite the opposite, they’re Drake and Yeezus and Earl, more or less ubiquitous but for good reason. They’re dope songs! There’s remixes of big Disclosure and Breach records, some well-worn hip hop samples… it’s very much the headspace that I stay in as a DJ and producer, bringing together different elements (familiar or not) and making them feel like “me.”

With Fool’s Gold, you’ve been at the intersection of dance and rap for years – what do you think about the rest of the world finally catching up?

Our releases have always come about naturally. In the early days it’s not like A-Trak and I were sitting around like, “lets put MCs on these electro records and strike it rich!” We just wanted to do something official with all the music our friends were making, because there wasn’t a real home for it otherwise. And that’s still the attitude. It’s not calculated at all. By the time the things we were doing at the start got LMFAO’d and thrown all over the radio, we were more excited about other shit anyway. Trends come and go, and that applies to the underground just as much – probably even more – than the pop side of things. We’re going to survive Miley Cyrus trap records the same way we’ll survive pitched down Cassie vocal deep house, fake vogue songs and “future bass.” I’d like to think that the music we release on FG would be dope in any era.

What’s been the most rewarding part of running the label? The most challenging?

It sounds a little Hallmark card but every record is rewarding in its own way. You always remember the headaches – the manager who was a pain in the ass, the typo in the liner notes, the weekends spent packing boxes, blah blah – but those things pale in comparison to how awesome it feels giving someone the joy of their first record. I remember handing Kid Cudi the ‘Day N Nite’ 12″ at this tiny club Luke & Leroy, and watching him jump on the couch and scream at the top of his lungs out of excitement. Or seeing people you’ve never met wearing Fool’s Gold shirts, it’s been happening for years and that shit is never not awesome! We just threw our big Day Off labor day party in Brooklyn, and wild to look out into a crowd of literally thousands and realize they came for something that we put together. We’re always going to face the growing pains that all independent business face. As an artist-run label it’s always going to be a huuuuuuuuge challenge balancing time spent on personal projects vs the business – I totally get why people close down their labels and go defunct. I understand why bands break up, in a way that I never would have before. When people ask about advice running a label I jokingly say “DON’T!” But I’m glad we’re still doing this, and in a lot of ways I feel like we’re only just getting started. If you are compelled to keep doing something even when you know it’s completely and thoroughly insane, you’re probably on the right track.

What can we expect from the Smoke Machine LP?

It’s very much the vibe of this mix. Smoke Machine is a beat album at the end of the day… ‘Bizness’ with IAMSU and Jay Ant kicks it off and there’s a bunch of other songs with rappers, some instrumental stuff, singing joints with people like MNDR. I’m making music I want to hear. There’s a playfulness that’s missing from a lot of music out there right now… DJ Khaled, of all people, said “if you can’t find it, you gotta go make it.” I think he was talking about how he gets famous dudes to keep giving him hit records but it applies to my attitude towards this album. I hope it surprises people. There’s a lot of joy in it.

What are some of your go-to tracks to move a crowd that isn’t dancing?

Anything Missy. Dancehall. ‘Pop That.’

You can mix just about anything – any plans for another Radio Friendly Unit Shifter mix?

I really love those ’90s alt-rock mixes. I wish they got a little more press to be honest… I don’t believe in guilty pleasure, just pleasure, but there’s definitely people who don’t embrace the fact that they were 12 and fucking with White Zombie. The RFUS shit is super fun to put together and I definitely have ideas for a fifth volume, I’ve just been more in an original production zone, and thinking too much about new stuff to really tap back into the throwback vibe. But who knows, I might hear The Crow soundtrack one night and get loose.

Your favorite discovery so far in 2013, musical or otherwise?