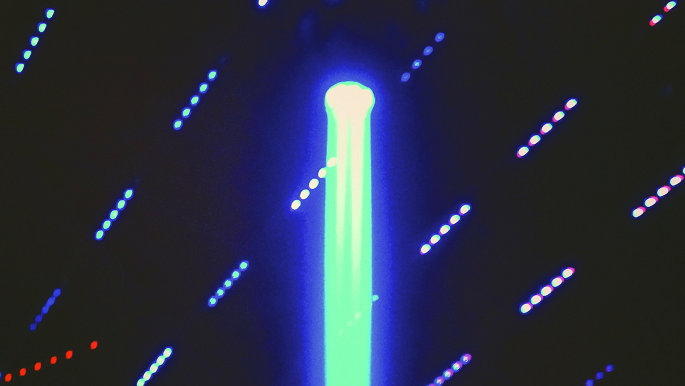 It’s been a ridiculously good month for tapes, with efforts from Yankee Yankee and 猫 シ Corp just missing the cut.

Instead we’ve got the thoughtful rhythms of Dour Tonic Input and DJ Votive, Petit Singe’s impressive breadth, 1080p Collection proving they’re one of the best labels around, the nostalgic kosmische of Norm Chambers, the bizarre world of The Spookfish, and a carefully constructed EP by Rachel Thomasin.

This is magical stuff. Dour Tonic Input gets things started with gamelan-style samples, providing the perfect mix of Eastern-tinged scales and forward-thinking electronics. It’s utterly hypnotic and impeccably pieced together, and easily 30 of the best minutes of music I’ve heard all year. DJ Votive offers up the antitdote with a gaslight shimmer extended over 30 minutes of expertly mixed rhythms and sounds. The breaks are perfect, the atmosphere sublime.

Petit Singe, a.k.a. Indian-born, Italy-based producer Hazina Francia is a new name to me, but on her second release Treagua she leaves her mark. Across these six tracks Francia shows a great deal of range, from the dubbed-out ‘No’ to the tribal-tinges of ‘Alone’, but shines brightest on the more experimental cuts. ‘Metro’ is organic yet steeped in digital-form cut & paste while the title track gets into abstract pop zones. Most impressive, though, is how cohesive all of this is. Nothing sounds out of place and Francia’s sequencing is masterful. I can’t wait to hear more from this intriguing project.

Canada’s 1080p Collection has emerged as one of the most reliable labels on the planet and the quality of all three tape releases they’ve dropped in the past month is testament to that. D. Tiffany’s swamp jams tack subtle melodies and cryptic vocal samples onto acid-tinged grooves, creating some form of bizarro techno. Khotin is more polished and sounds as if it was beamed back from a future Japanese space station – even the dubbier elements are otherworldly. Lastly there’s ATM. Xerox is swimming in a stream of nostalgia-laced circuitry, assembling beats from little more than cellophane and magnetic tape. It’s a long lost soundworld I am happy to get lost in.

Norm Chambers is best known as Panabrite to most people, but this, his first release under his given name, is a peach. Sensory Margin sounds like a lost gem that a label liked Medical Records would unearth and reissue. Chambers’ music often feels as if its from another time. His sensibilities and compositional chops have always started from a place that’s imbued with ‘60s and ‘70s style library music, but always with a pop slant to them. Sensory Margin thrives on that dichotomy: ‘Hold’ is downright melancholy while the awesomely-named ‘Viper Street’ gets into heady kraut territory, though never to the point where the listener can’t hum along. It’s wonderful.

Who is The Spookfish and does it really matter? Living Room is a haunted journey through living rooms and rural alleyways. Album opener ‘Swimming In The Lake’ grabs hold and never lets go, the synth lead so sugary and so catchy that the pulsating beat is almost an afterthought. The Spookfish covers a lot of ground, getting acoustic and contemplative on ‘Black Ghost With Red Eyes’ before reviving mid-’90s tape scene vibes on the closer, ‘Snake Song’. Living Room is aptly titled as The Spookfish draws the listener into his home, cooks dinner, and sets the world on fire. Great tape.

I get excited when I hear stuff like this released on tape. Outlines is an impeccably-produced album and having it released on tape helps show what a legitmate format it is. Thomasin, who hails from Boston, has an intoxicating voice that grabs the listener from the very start, and everything about Outlines is purposeful and well-done. This is a well-produced, wonderfully-composed album that just happens to be on tape – I’ve been listening to it at night so Thomasin can sing me to sleep. It’s simply beautiful.