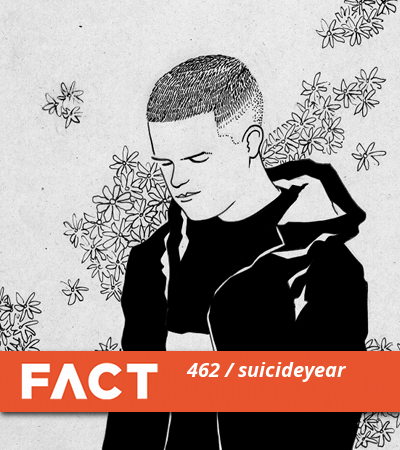 Suicideyear follows his debut album Remembrance with a session of hip-hop and smudged electronics.

Although Remembrance is a solo record, James Prudhomme emerged on most people’s radars as a collaborator, releasing music with the likes of Yung Lean and Main Attrakionz on vocals. Although he still collaborates with vocalists – he teamed up with Rome Fortune on ‘Trap Lady’ this Summer – Remembrance sees him further step out as an artist in his own right, blending hip-hop drum grids with drifting synthwork and reflections on loss (the album’s title, Prudhomme tells us, “stems from my attempt to accept the loss and difficulty of the past year without dwelling, instead trying to move on.”) It even closes on a My Bloody Valentine cover; no wonder it found a home on the Software label.

Suicideyear’s FACT mix should come as no surprise to fans of his music: like Remembrance, and his 2013 mixtape Japan, he mines hip-hop and electronica tracks for their most heartstring-tugging elements and focuses squarely on those – whether that’s an interlude from Drake’s Take Care pitched down, or a refix of Robert Miles’ ‘Children’. Fans of Ryan Hemsworth and Morri$‘s past sessions for FACT – you’re in for a treat.