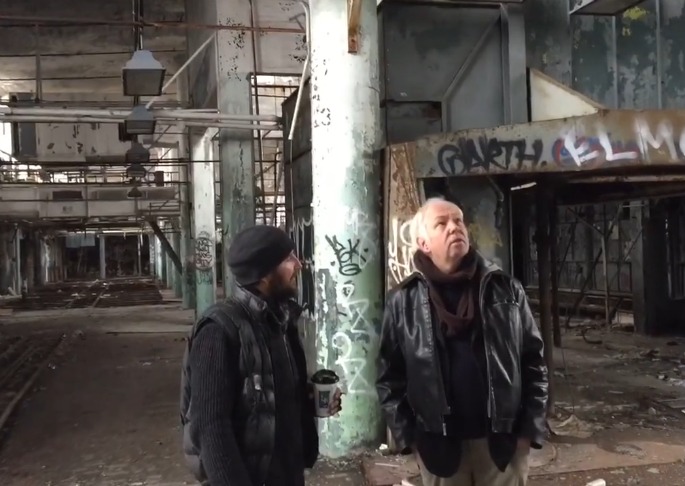 The owner of Berlin’s famous Tresor club has had his eye on an abandoned car plant in Detroit since he started visiting the US city a decade ago.

This week Dimitri Hegemann got his first tour of the Fisher Body Plant No. 21, a crumbling concrete building covered in broken glass and fallen asbestos. Nearly every wall is tagged with graffiti and half of the windows are missing, but while it may look ripe for the wrecking ball, his guide points out in this video by Detroit Free Press, it’s as solid as a war bunker.

Hegemann believes he could turn it into a club with the same industrial aesthetic as Tresor, even adding a workspace, youth hostel and restaurant. The spaces he has developed in Germany “look the same”, he points out. “I still think it could be done,” Hegemann said after his tour. “The place fulfills my expectations.”

The Berliner was in Detroit this week to meet city officials and give a presentation of his proposals for “redeveloping, greening and repurposing” the building. He didn’t discuss details of his negotiations with the city, but he is open to leasing the building with an option to buy.

Even if Hegemann gets the go-ahead, there are plenty more hurdles to overcome. Detroit City Councilwoman Raquel Castañeda-López told Hegemann that his plan to redevelop the building floor by floor may be rejected by regulators who don’t want clubbers in close proximity to environmental hazards.

There’s also the problem of Detroit’s alchohol laws which prohibit serving after 2am. “We have no last calls in Berlin,” said Hegemann. “The night is a time for creative people… our club in Berlin opens around 12, but nobody comes before 1.30.” When the concept of an alcohol-free after-hours club was brought up by someone in the tour group, Hegemann said he was sceptical: “I must say that as a European, [that] won’t work.”

Not all of the city’s residents are convinced that Hegemann’s plan is right for Detroit, which has its own specific problems relating to crime, race and unemployment. Cornelius Harris, manager of techno collective Underground Resistance, agreed that the project can “provide inspiration”, but added: “There are issues in Berlin that people in Detroit wish they had. There’s no real comparison.”

While the city itself is still climbing out of bankruptcy, Detroit’s music industry was estimated in 2013 to be worth over $1 billion. Carl Craig is one of many homegrown DJs who’s been vocal in his support for the city – watch him discuss Detroit’s techno history and introduce its people and places.