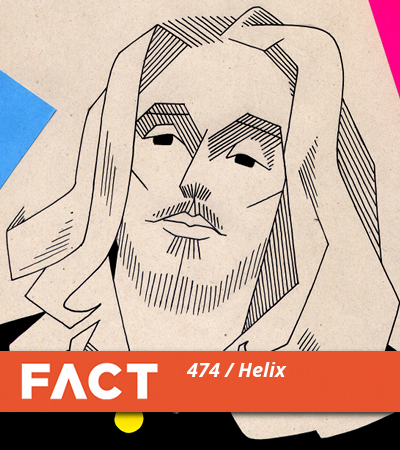 Based in the States but signed to Night Slugs, Helix makes European music in an American way. Or is that the other way round?

The US-Euro line is one that’s been wheeled out before about Helix – he’s even talked about his music in terms of Chicago legend Ron Hardy making grime – but it really is at the heart of what he does. He worships Detroit and Chicago – particularly the quick, raw mixing style of Jeff Mills and Derrick May, which is present in his FACT mix – but draws heavily from grime, to the point where he describes having Flirta D vocal his ‘Drum Track’ as “a fucking dream come true.” And although his music could loosely be described as classic loop techno, it feels more in tune with current European sensibilities – particularly the Club Constructions axis – than current Stateside dance music.

Away from geography, what makes Helix’s music work is the way he finds the subtleties in simplicity. Whether laying down loops of drum sounds and clipped chords (‘Drum Track’; ‘Stacks Riddim’) or relentless techno (he described his recent Porsche Trax EP as DJ Vague as inspired by driving “fast in the dark – like hella fast”), he’ll find exactly what makes a track work, and focus on it to the point where five channels and a simple 8 or 16-bar arrangement is all it needs. It’s honestly uncanny.

The fourth track on Helix’s FACT mix is listed as simply “horns & bass”. Sometimes that’s all you need, and no one proves it quite like him.