FACT Rated is our new series digging into the sounds and stories of the most vital breaking artists. Next we meet K Á R Y Y N, a LA-based composer whose recent track ‘ALEPPO’ is an experimental electronic exorcism of childhood memories in that city, and one of the year’s most startling debut singles. Simran Hans talks metaphysics and emotion with an artist who counts Björk among her admirers.

K Á R Y Y N remembers the day she heard her former school had been bombed to rubble. The Syrian-Armenian American composer turned electronic artist, whose haunting debut EP Quanta 1 dropped last month, was born in Alabama and raised in Indiana, but would spend summers in Aleppo, the Syrian city that for five years now that has been the site of increasingly brutal conflict. “I thought I was going to go back to with my children one day, if I have them,” she tells FACT. “It was devastating seeing that city being destroyed.”

The impressively sparse Quanta 1 is led by a single named and inspired by that city – ‘ALEPPO’, a four-minute lament “all about the brain processing memory” that recalls, in the track as well as its home-video style accompanying visual, childhood stays in the city with her cousins. “I wrote this song in 2015 during a time when the word or the name Aleppo wasn’t being said very often,” she explains.

“I was seeing images of Aleppo [on TV] and I created a sound on the Juno, and then I had all the Kaoss pads going for my voice to process,” she adds. On the track, looped, layered vocals are contrasted with harsh synths that glitch and warp, catching on themselves. “I was just making layers, and seeing these words, and I recorded it all.” The result is disarming. 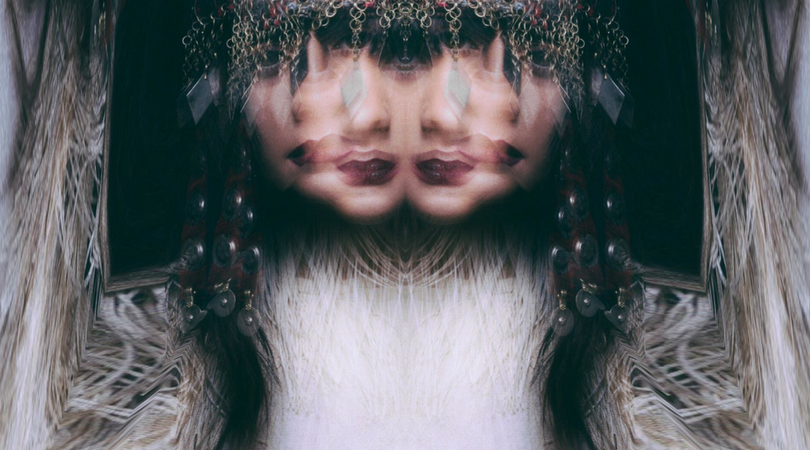 “I’m obsessed with the idea of computers gaining consciousness.”

Glassy, celestial vocals recalling FKA twigs on a backdrop of twitchy electronics make Quanta 1 a release that’s as ambitious as it is personal for KARYYN. It’s also as grand and cinematic as you’d expect for someone who’s spent seven years collaborating on film soundtracks and operas, including ‘Of Light’, a multimedia project with American director Samantha Shay inspired by her mentor Marina Abramovic, performed in Reykjavik and bigged up by Björk.

K Á R Y Y N lives today in LA, where’s she been since her family relocated at age 10, though she’s also bounced around New York and Berlin in the intervening years. It was in Berlin that she met Quanta 1’s co-producer Steve Nalepa who encouraged her to “honor the oddities in the music” and to find her voice as a solo artist.

That sense of oddity is felt on another track, ‘BINARY’, in which an emotional vocal pierces through a densely textured cocoon of noise. “Love me beyond the numbers,” she sings. “It’s about recognizing a soul mate – any kind of soul mate, not just romantic. And about the fantasy of imagining the ability to touch them or find them through a time bend,” she says before referencing Matthieu Ricard’s book The Quantum and the Lotus: A Journey to the Frontiers Where Science and Buddhism Meet (over the course of our conversation, she dips frequently into a love for metaphysics).

“I have been for a long time now obsessed with [the idea of] computers gaining consciousness,” says K Á R Y Y N, who calls herself “a visual composer”, and talks about her music using the language of synaesthesia: describing sounds as colors and physical textures. “I processed the sounds I had made for something else and it just sort of spit out this thing for me which instantly sounded like a very metallic, magnetic gravel; really fertile wire mesh; a little bit of lavender tulle.”

When I ask which artists have influenced her sound, she’s quick to correct my phrasing, noting that she’s inspired by rather than directly influenced by the musicians she loves.. “I’m a huge John Tavener fan, I love Arvo Pärt,” she says of the classical choral music she’s currently obsessing over, though she maintains that she’s more influenced by the audio minutiae of the everyday. “I wouldn’t really say I’m a singer; I would say that I emote [vocally],” she tells me. “I’m very influenced by the sounds that make up daily life. The work is made up a lot of my voice, processed to sound like other things.””

There’s more to come after Quanta 1, says K Á R Y Y N, who describes herself as emerging from a period of creative incubation and spiritual reinvention. “I’d been in, like, a ‘within’ process for years. I was like, ‘okay, I want to rewire my brain, my software’… I healed myself,” she says. “It was me finding a reason and an intention again to make the work.” As the creator of one of 2017’s most intriguing debut singles to date, it’s thankful she found one.

Read next: Visible Cloaks are the Portland duo bridging the gap between Ryuichi Sakamoto and 0PN